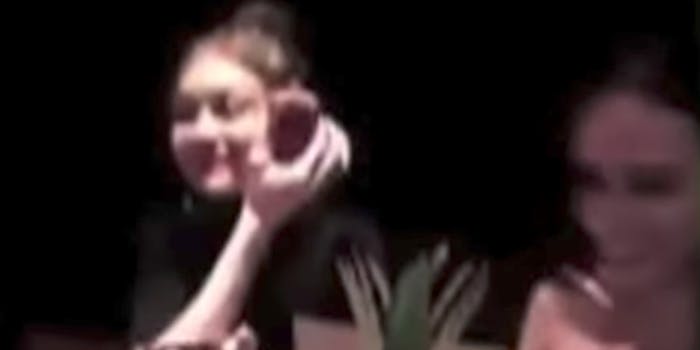 Chinese Twitter does not want her in the next fashion show.

Fans are resurfacing a problematic Instagram video of celebrity model Gigi Hadid after Victoria’s Secret announced she’d be returning to its annual Fashion Show, set to take place in Shanghai, China, in November. What Victoria’s Secret didn’t realize is that Chinese pop culture fans are actually pretty anti-Gigi—and they have a good reason.

It started earlier this week when the 22-year-old posted a video announcing the fashion show. “Forever and ever and ever a dream come true to be asked back to the VS Show !!!” she wrote. “Every aspect makes me feel like a dreaming kid again.”

Hadid got herself into hot water back in February when her sister Bella shared a video of the model squinting her eyes while holding a cookie shaped like Buddha. It’s a move critics considered a racist impression of the religious figure, so in a country that’s home to the world’s largest Buddhist population, it makes sense why Hadid might not be a welcome guest.

One fan, according to Metro, commented on Gigi’s Instagram video: “We like some people who respects us, not you. What you have done made us unhappy. And Chinese do not welcome you. So don’t come to China (sic).”

Another commented, “We don’t wanna see u on Victoria’s Secret Fashion Show 2017 Shanghai,” while others stuck to the now-infamous snake emoji.

According to Elle UK, the original video “was later deleted and Gigi has now disabled comments on her recent Instagram snap.” But all that did was inspire people to head over to Twitter:

Victoria’s Secret has not released a statement.