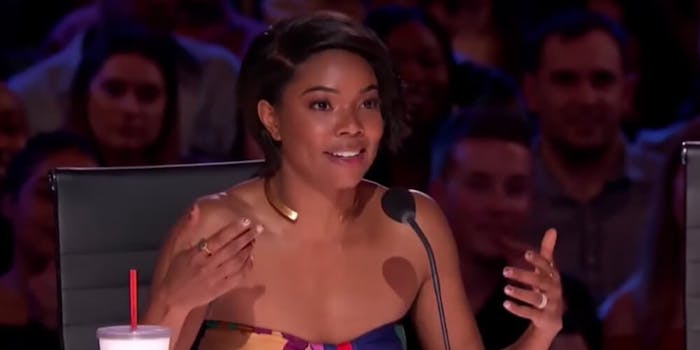 The former 'America's Got Talent' judge was allegedly told her hair was 'too Black.'

Gabrielle Union’s fans are rallying behind her under the hashtag #BlackHairChallenge after she was nixed from America’s Got Talent and allegedly told her hairstyle changes were “too Black.”

In November, news that Union and fellow judge Julianne Hough were dropped from the show after just one season raised eyebrows. Rumors circulated that both women were targeted because of their appearance. According to Variety, Union, who raised multiple concerns about NBC studio’s toxic work culture during her tenure as a judge, was told her hairstyle changes were “too Black” before being fired.

The news of NBC’s apparent discrimination has drawn both ire and criticism, but it also has reawakened the #BlackHairChallenge, with many proudly posting pictures of their hairstyle changes on the platform. Celebrities, activists, social media influencers, and fans alike are rallying behind Union under the hashtag.

“Feeling like we should start up the #blackhairchallenge again. Post up to 4 pictures of yourself with this hashtag. Embrace your different hairstyles. We’re retweeting everyone!” @melaninmamis, the creator of the hashtag, tweeted.

Many answered the call.

“I wanted to join the #blackhairchallenge and let every girl know that your short 4c hair is beautiful. Own it,” Twitter user @Bubblyhentai wrote, along with multiple pictures of her styled tresses.

Because Black women are incredible, creative and bold…and if y’all could change your hair this much…you would too. Trust me.

Some men even joined in on the challenge.

“Can men do the #blackhairchallenge too?” Twitter user @cooli_ras_art asked, along with four shots of multiple looks.

Union responded to the outpouring of support with a “thank you” tweet aimed at her fans.

“So many tears, so much gratitude. THANK YOU! Just when you feel lost, adrift, alone… you got me up off the ground. Humbled and thankful, forever,” she wrote, along with a heart emoji.

So many tears, so much gratitude. THANK YOU! Just when you feel lost, adrift, alone… you got me up off the ground. Humbled and thankful, forever ❤