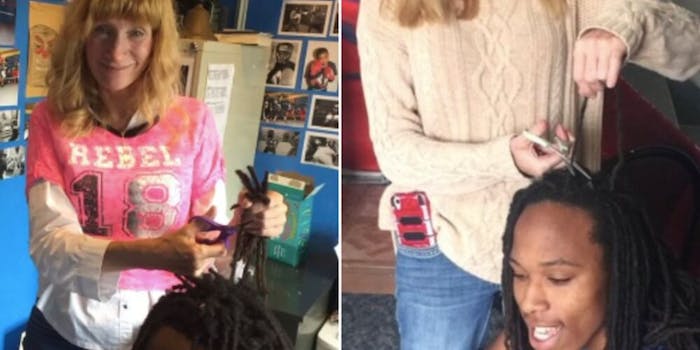 NFL, Jay-Z-funded group cut off Black youths’ dreadlocks to give them ‘a better life’

Crushers Club, a Chicago-based nonprofit that will receive $200,000 from the National Football League (NFL), is being criticized on social media for having shared photographs of its founder cutting off the dreadlocks of Black youth.

Twitter user Resist Programming retweeted Crushers Club’s tweet from 2016, in which the founder Sally Hazelgrove, who is white, celebrates cutting off a youth’s locs.

“And another Crusher let me cut his dreads off! It’s symbolic of a change and their desire for a better life!” the Crushers Club’s tweet reads.

In a caption of another photo of Hazelgrove cutting youth’s hair, Crushers Club wrote, “He’s freaking out but looks so cute! #loveshorthair.”

Crushers Club has now deleted some of the above 🗑 tweets.

📸: Tweets and pics of the Crushers Club practice of cutting off the locs of Black youth.

Crushers Club is an organization that teaches youth how to box and attempts to be the “strongest alternative to gangs.” The NFL partnered with Jay-Z’s company Roc Nation to fund the nonprofit. The collaboration is called Inspire Change, and it will fund several organizations that focus on “education and economic advancement” and “police and community relations.”

The optics of that woman cutting their hair is awful. It's simply violent.

Well damn. I wanted give Jay Z the long game benefit of the doubt, but when the process is this toxic, it doesn't matter what the end destination is.

Heard Kaepernick once speak to youth in Chicago about the importance of letting his hair grown out and seeing his history/culture when he looked in the mirror. This is Jay-Z fronting for an NFL program *in Chicago* that cuts that hair. Hard not to choke on this. https://t.co/o8qogaCm8k

Resist Programming also shared Facebook comments from three years ago, in which someone called out Hazelgrove for celebrating cutting young black men’s hair.

“There’s a rich cultural heritage associated with locs,” Facebook user Stephen Styles wrote at the time. “If we’re gonna celebrate a young person’s sacrifice for his culturally important hairstyle just so he [can] find more options for survival and success, the least we can do is name the fact that this sacrifice shouldn’t be necessary.”

In response, Hazelgrove wrote back, “I dont see race children are children to me but i will be more thoughtful about my words.”

“I did not think about the ramifications,” Hazelgrove told the Washington Post. “I can understand how I could be interpreted as insensitive, but that certainly was not our intention. I was trying to support his decision.”

Resist Programming’s tweet thread prompted filmmaker Ava DuVernay to ask Twitter users to share pictures of themselves with locs to celebrate “the beauty and majesty of life with locs.” It led to the hashtag #loclife.

Let’s replace those images of a Trump supporter gleefully cutting a young black man’s locs to give him a “better life”… with the beauty and majesty of life with locs. If you adorn yourself with natural locs, share your pictures with the hashtag #loclife. I’ll start. xo pic.twitter.com/IAw0zjfwWN

#loclife Also, I have words for the folks who told me I’d never be able to practice law because locs are so “unprofessional.” pic.twitter.com/EJpK1nprZw

There are hundreds of Black men in the NFL living that #LocLife. I’d love for them to speak towards the levels of disrespect involved in the NFL and Jaÿ-Z bankrolling .@CrushersClub, that sought to “inspire change” in young Black men’s life by shaving their locs, IN THEIR NAME. https://t.co/y5ubiptW5N

I’m giving my son Sekou a better life by raising him to love all of who he is including his locs. #LOCLIFE @ava pic.twitter.com/FH91kzwpot

Social media users have also criticized the nonprofit for other tweets that Resist Programming uncovered. One of Crushers Club’s tweets read, “all lives matter.” Another tweet that enraged Twitter users was for a “Cop and Cupcake” event, in which Crushers Club commented, “What better way to bridge the gap than with sweets?”