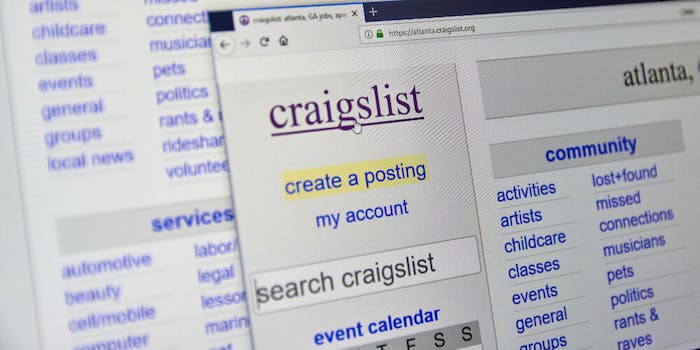 The 14-year-old was charged with a hate crime.

A teen in Naperville, Illinois, was charged with a hate crime after posting a racist Craigslist ad of his Black classmate. The teen appeared in court on Wednesday.

According to the Chicago Tribune, the white 14-year-old was hit with two counts of committing a hate crime (a juvenile felony) and one count of disorderly conduct for taking a picture of a Black classmate during lunch and posting it to Craigslist, along with the caption, “Slave for sale.” Both of the boys are freshmen at Naperville Central High School, and an investigation was opened by Naperville police four days after the discovery of the post.

The DuPage County State’s Attorney, Robert B. Berlin, said the allegations were “beyond disturbing” in a statement.

“Hate crimes have no place in our society and will not be tolerated in DuPage County,” Berlin said.

During the trial, the judge on the case recommended the two avoid one another for the duration of the trial.

“It wouldn’t be a bad idea for you to stay as far away as possible while you’re at school,” he told the boys, per the Tribune.

In order for the courts to reach a guilty verdict on the hate crime charges, prosecutors need to prove that the boy’s actions were motivated by prejudice because of race.

However, the boy’s defense attorney, Harry Smith, described his client and the victim as friends and explained that they partake in a school activity together. He also told the courtroom that his client will apologize to the victim in front of the school’s principal.

This is not the first racially-charged news story to come out of Naperville as of late. In October, the city made national news after a racist incident took place at a local Buffalo Wild Wings. Reportedly, a party of 18 people was asked to move tables after one of the regular customers refused to sit next to Black people. After a Facebook post about the incident went viral, the restaurant chain fired two employees who were involved and made staff undergo mandatory sensitivity training.