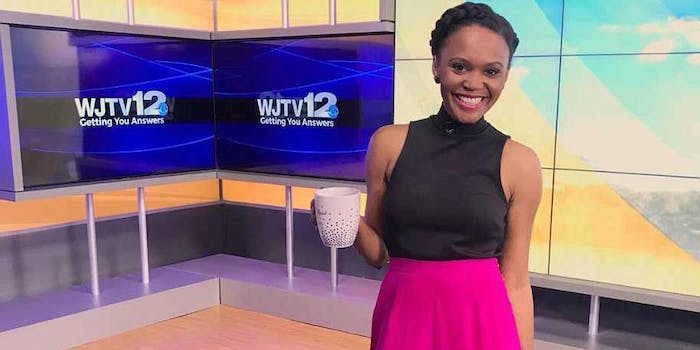 Black journalist says she was told her natural hair was ‘unprofessional’

Brittany Noble says speaking out against discrimination eventually led to her termination.

A journalist in Jackson, Mississippi, says she was discriminated against as a mother and a Black woman, which led to increased harassment from the company and eventually her termination.

In a Medium post that has since gone viral, Brittany Noble describes how she filed an HR complaint after her boss at CBS affiliate WJTV asked her why her hair isn’t “flat.” Noble, who was one of the first journalists to report on the shooting of Mike Brown, said her boss told her that her natural hair is “unprofessional” and “the equivalent to him throwing on a baseball cap to go to the grocery store.” He said that “Mississippi viewers needed to see a beauty queen,” according to her Medium post.

She told the Daily Dot after a two-month investigation and her sharing the recordings of their conversation, her boss was eventually terminated.

“The problem is, they replaced the boss and the behavior continued,” she told the Daily Dot. “That’s when I started going to the EEOC [Equal Employment Opportunity Commission] for help…because I knew at this point that this was a systematic problem.”

At the heart of the debate surrounding her hair is a crucial moment brought on by motherhood. Noble, who says she’d been wearing hair extensions for “the entirety” of her television career, made a decision to stop doing so after giving birth to her son in October 2016.

“Now that I’m a mother, I’m thinking about my child,” she told the Daily Dot. “If I had a little girl, how would I teach her to love her hair when I don’t love my hair when I’m out here wearing a wig? So that’s when the conversations about my hair started coming up. I wanted to go natural as a result of my son.”

She also said in her post that she went into labor early, owing to the stress she suffered as a pregnant woman in the newsroom. Once she had her son, who was five weeks premature and went through a myriad of health complications, she had “no time for a break” during her shifts between 4:30am and 9am. Under federal labor laws, employers are required to provide a new mother both the space and the time for pumping breast milk every two to three hours.

“I never would have spoken out unless my mentor hadn’t talked to me,” she told the Daily Dot, adding that her fellow Black colleagues at WJTV shared similar concerns.

“They have to collect their paycheck,” she said. “It was very, very difficult for me to speak out knowing that.”

She told the Daily Dot that WJTV eventually terminated her three-year contract early, in May 2018, for taking sick leave to tend to her grandfather. She said the station claimed “grandfathers don’t count” and it had to be somebody “closer” within the family to qualify as family leave. “They didn’t know my grandfather practically raised me,” she said.

Since then, Noble said the investigator she had been working with at the EEOC has been reassigned to another case. Noble’s next step is to report a series of investigations she says were shut down during her time at WJTV.