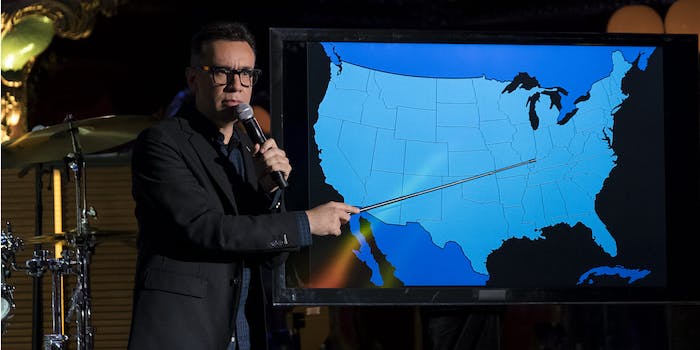 Fred Armisen tries to find the beat in ‘Standup for Drummers’

This special goes niche. So niche, it might put your butt to sleep.

The comedian stays on brand and gets hyper-specific with his audience for his first Netflix special, literally doing standup for an audience of drummers. If you’re not a drummer, you might still eke out a “heh” for his joke about mispronouncing Paiste or Neil Peart; if you’re a live music fan, you’ll likely recognize some of the onstage dude behavior he mimics, which has become fodder for Hard Times headlines. If you have no vested interest in drumming, Armisen still has some bits for you, but you’ll have to wait for them.

As Todd Glass did with his recent Netflix special, Armisen has retrofitted the traditional standup special with a musical component. He’s a longtime percussionist, having drummed for Chicago hardcore band Trenchmouth; he’s also the bandleader for Late Night with Seth Meyers. He even foreshadowed Standup for Drummers with the Drag City instructional parody Complicated Drumming Technique.

So holding a stage while spoofing his trade is no issue, and he brings in some accompaniment to illustrate his little drummer bits: Sheila E, Thomas Lang, Green Day’s Tre Cool, Warpaint’s Stella Mozgawa. He also does drummer impressions, but at certain points, Armisen drifts into Guy At a Party Who Won’t Turn Off and the special loses momentum.

There are moments when Standup for Drummers is educational, like when Armisen recites regional accents or plays on drum kits from different decades, expanding on their importance in contemporary music. His bit about the edgy origins of doo-wop music is entertaining and more physical. But some parts feel like filler, and his joke setups get a bit formulaic. “Aren’t crazy people crazy?” he says at one point, for no real reason. (During a bit about cymbals, there’s a reaction shot of Dinosaur Jr.’s J Mascis in the audience, mouth slightly open, waiting to laugh. I came back to that a few times.)

Armisen obviously knows his audience, and Netflix gave him the freedom to speak directly to it. This could signal a pivot to more of these audience-specific specials, but it’s hard to get more niche than this. Armisen is deft with impressions and characters, but as a standup he still needs practice.