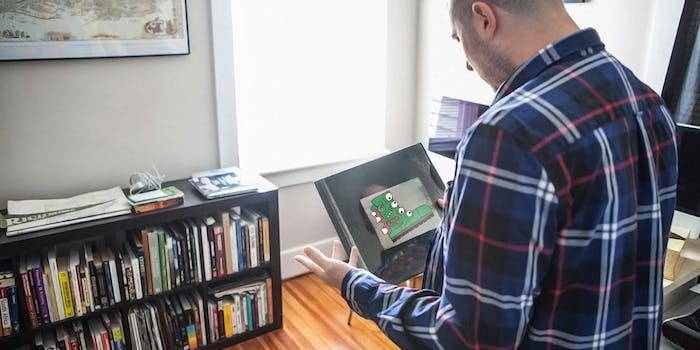 Recently, a Facebook post kept showing up in my timeline: “These Oakland Punks Helped Turn a Failing Bike Shop Into a Failed Bike Shop.” The photo and headline were so pitch-perfect, the subject matter such a cross-section of interests within my Facebook experience that I scrolled past it the first time, assuming it was real.

Then came the realization: I was finally old and jaded enough to be the target audience for a punk satire site, and so were a lot of my Facebook friends. “Seriously, though, how weird is it that there’s a version of The Onion aimed specifically at us?” one acquaintance commented. “And that the shit is nearly always spot-on and hilarious and painfully close to home?”

The article is from the Hard Times, a satire site that reads a lot like The Onion, but aimed at punk, hardcore, and underground subcultures instead of the “local man.” That’s more or less what 25-year-old co-founder and editor-in-chief Matt Saincome had in mind when he started the site two years ago, while he was a music editor at SF Weekly.

“The audience has always been millennials who feel connected to alternate music subculture,” he says. 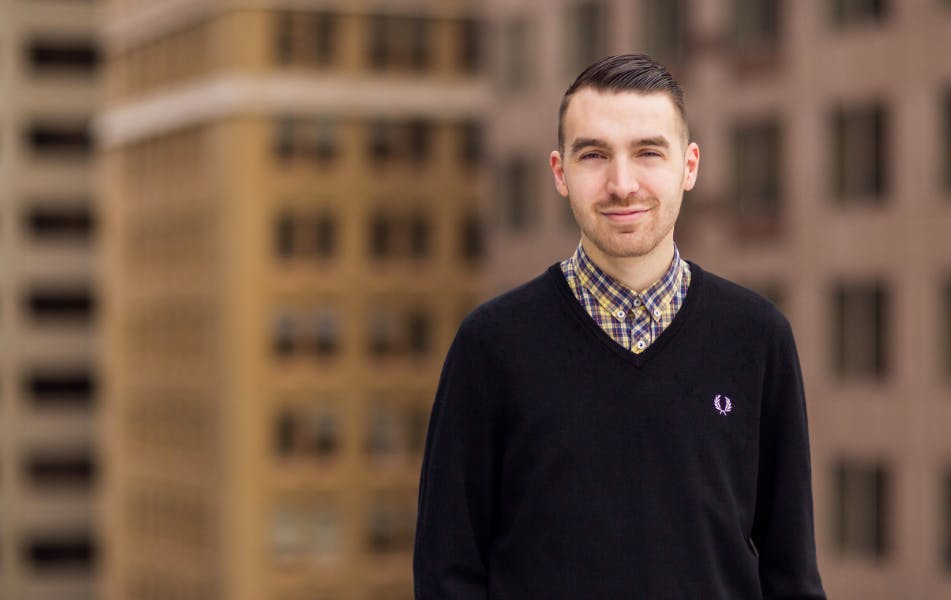 People told Saincome, who also played in bands, that the site wasn’t a good idea, but he started putting money away to fund it nonetheless. He debuted the Hard Times with just $800, and says the first few stories were drawn from his experiences of being in a band and dealing with bullshit. He knew there was an audience for this kind of lifestyle humor.

Over the last year or so, the Hard Times found that audience on Facebook, where its stories are shared by the nostalgic, jaded, reflective, and self-deprecating. Headlines like “Season 3 of Serial to Identify the Three Other Members of Fugazi,” “Punk Dad Prefers Son’s Earlier Stuff,” and “Influential Band Would Rather Just Be Rich” address a specific cross-section of internet and music culture obsessives. They recently called out hypocrisy and ironic Facebook invites with the story “Friend Who ‘Attended’ ‘Smash Mouth Show at Orange Julius’ Mocks Your Standing Rock Check-In.” 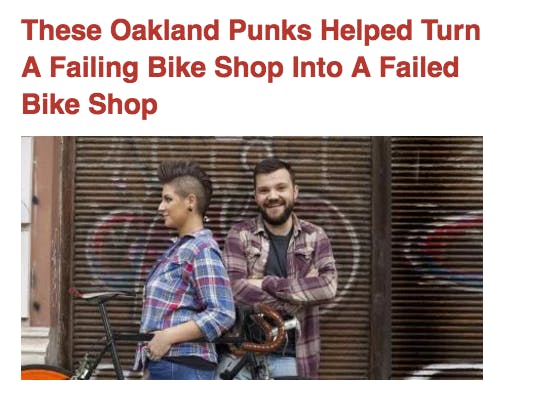 “I’ve been in bands where you tour the country and have ten new fans,” Saincome says. “With the Hard Times, we put it out there and it spread like wildfire.”

While the target audience was initially millennials, it evolved once there was a bigger staff and more perspective. “The site became this really awesome team effort,” Saincome says. They still take aim at vegans and straight-edgers, but now there are more posts about parenthood, politics, work, aging, police brutality, mental health, and feminism. 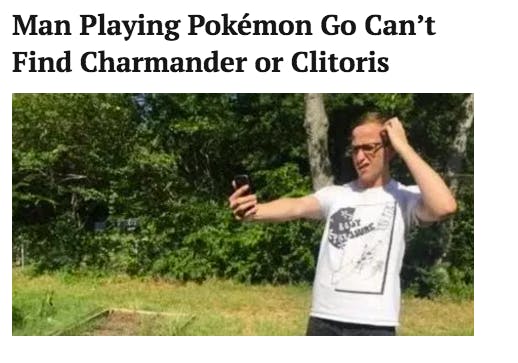 “I grew up in the punk scene and it shapes you,” Saincome says. “I know for me, when I started to see these stories resonate, it makes you feel like you’re part of something… You can share it to say, this is part of my identity.”

This market has been tapped before: The ‘90s zine Chunklet often satirized music criticism and record-collector obsessives. The website Makeoutclub allowed for self-laceration, too. There’s a righteousness and smugness that’s ripe for parody, as Portlandia has proven. We’re living in an age where a former member of Blink-182 got caught up in a WikiLeaks dump and Smash Mouth is beefing with the Oakland A’s Twitter account.

However un-punk, the Hard Times has started to become profitable. In September, according to Saincome, the site saw 3 million views. He’s been able to quit his day job and focus on the site full-time. Their Facebook engagement is often higher than other music sites like Vice, and they’ve been able to sell ad campaigns so staff is paid. Ironically, they now have a partnership with Vice, which has already caused some fans to say they “sold out.” 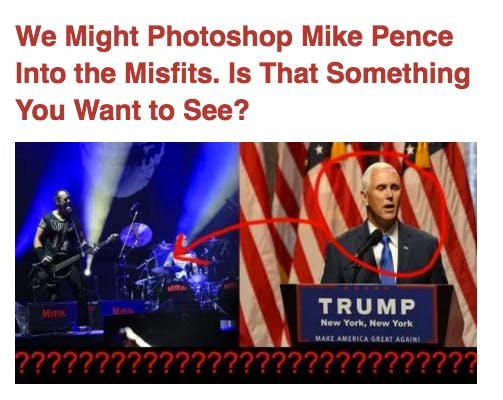 “Some of our best headlines can reach over a million people in 24 hours,” says Saincome. “On average, we reach about 2-3 million a week total, with each post doing somewhere around 100k, but it depends on how much content we post.”

A screenshot provided by Saincome shows the Hard Times recently beat out SNL’s online comedy arm, Above Average, in terms of Facebook engagement, with less than a third of the posts. He thinks the fact that they do fewer posts a day works to their advantage and “speaks volumes about quality over quantity.”

Saincome explains that one of the main reasons he started the site was to address the issue of depression and suicide in the punk scene. “How can I bring something to the table that makes people laugh?” he says. “Punks aren’t really the best audience to joke to… but if you’re a fan of the Hard Times, there’s someone who had a similar life trajectory as you.” 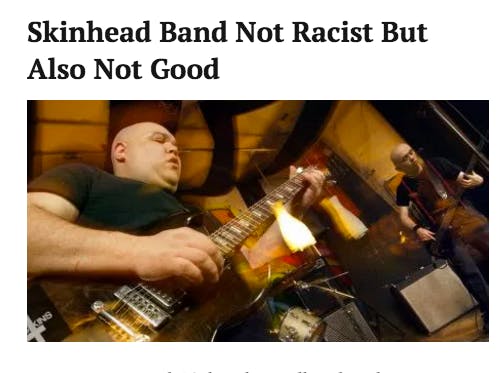 He admits that right now, the majority of Hard Times writers are men—about 80 percent. But he’s actively trying to get more perspectives involved.

“Female writers are outnumbered on the site, but that number is slowly increasing,” says writer Sari Beliak. “Also, the women in the group are pretty badass, so our presence feels bigger to me.”

The existence of women’s perspective has led to more shareable and relatable stories like “Graffiti in Venue Ladies’ Room Surprisingly Supportive” and “Man Playing Pokémon Go Can’t Find Charmander or Clitoris.” There are jokes about the “band girlfriend” and “female musician” as well as the angry white male. 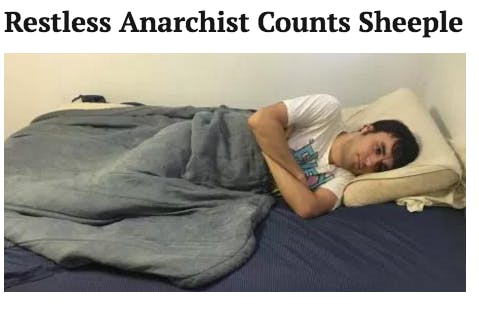 “I find that I often write more male characters because we’re mocking them,” says Beliak, “like ‘the guy explaining feminism to women’ or ‘the guy who quizzes you on your knowledge of your favorite band’ or ‘the guy who spends hours playing Pokémon Go, but doesn’t know how to please his girlfriend.’ You read those and go, ‘Oh, yeah, I know that guy.’ It’s fun to write recognizable characters because there’s a lot of silly shit that happens in these scenes and people tend to take themselves very seriously.” 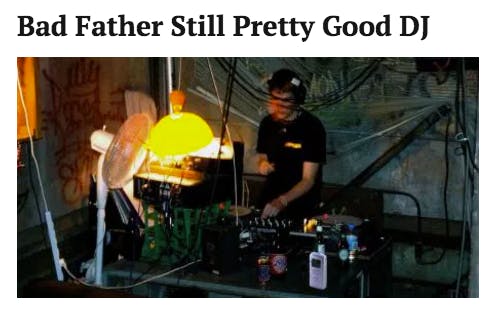 “We’re writing for our peers,” says writer Krissy Howard. “It’s not like some journalist who hasn’t been to a show is like, ‘Look at these assholes playing for two people and a dog in someone’s basement on a Wednesday!’ That would just be mean. We are those two people and we are that band, and because we’re in on the joke I think it kind of allows people to feel safe enough to laugh at themselves and all the silly things that come with being part of this scene.”

The Hard Times does try to tackle more serious issues, like homophobia. Saincome says the stories they often get the most backlash on are those about predatory types in music scenes, specifically older band guys hooking up with young girls. This is perhaps best encapsulated in “Legendary Frontman Proudly Recites Age of Consent in All 50 States” or the timeless op-ed “Weird, That Guy Has Always Been Cool to Me.” A recent story about a new scene “scapegoat” satirized the internet’s habit of virtually piling on someone.

“Punk attracts wayward kids and sometimes people are overly vindictive and it gets political,” says Saincome.

So far, they haven’t received any cease-and-desists from Ian MacKaye or Glenn Danzig, but Saincome says some people don’t like the site because they don’t see punk as a joke. It might not be funny “if your band is still touring and you take it really seriously,” he says.

But if you’re viewing the site through the lens of nostalgia or parody, the burn isn’t as bad. One of my Facebook acquaintances summed it up: “The Hard Times certainly makes me laugh and feel self-conscious in equal measure.”

Saincome goes further: “I want to encourage people in the punk and hardcore world to use comedy to question the world around them, their peers, and themselves.”