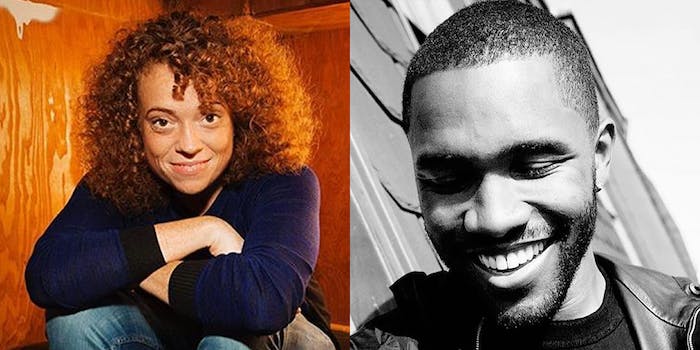 Ocean picks a side on Tumblr.

Frank Ocean has voiced his support for standup Michelle Wolf after the comedian came under fire for remarks she made during Sunday’s White House correspondents’ dinner.

Wolf, a soon-to-be Netflix late-night host, was tasked with roasting the attendees at the annual Washington media gala and caught a lot of backlash in the hours following her 20-minute set. In particular, people seemed to take offense at jokes Wolf made about Sarah Huckabee Sanders‘ “perfect smoky eye”—a common beauty term for a look that uses eyeliner and shadow in brown, grey, and black hues. Sunday night, Association President Margaret Talev controversially apologized for Wolf’s set, writing that it “was not in the spirit of” the group’s mission of “honoring civility. “

Speaking to NPR’s Terry Gross Tuesday, Wolf said, “I wouldn’t change a single word that I said. I’m very happy with what I said, and I’m glad I stuck to my guns,” and it appears she has an ally in singer Frank Ocean.

In a Tumblr post this week, Ocean wrote simply, “I LOVE THE WAY MICHELLE WOLF THINKS. 😄”

The line was an apparent nod to a Kanye West tweet about conservative pundit Candace Owens; “I like the way Candace Owens thinks,” West tweeted last week.

Earlier in the week, Ocean shared a still of West and Mike Myers from the controversial “George Bush doesn’t care about Black people,” moment during the 2005 Hurricane Katrina relief telethon, so it’s safe to say that celebrities’ roles in televised political moments are on the pop star’s mind at the moment:

Dave Chappelle has also spoken out in defense of Wolf, telling PBS, “I really respected what I saw… I know how hard it is to do what she did… I think she nailed it.”