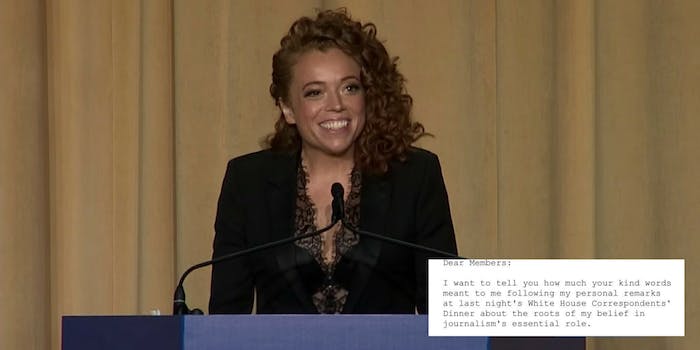 The White House Correspondents’ Association has apologized to its member’s for Michelle Wolf’s scathing monologue hitting at the press (and the president, too).

On Sunday night, the association’s president Margaret Talev apologized to members who had expressed “dismay with the entertainer’s monologue and concerns about how it reflects on our mission.”

During her monologue, which also garnered acknowledgement from Eric Trump, Wolf lambasted the right while leaving the press in her sights, stating that President Donald Trump, “helped you sell your papers, and books, and TV. You helped create this monster and now you’re profiting off of him.”

Many journalists replied by criticizing Wolf for seemingly erasing the little trust that Americans had left in the press. Other critics shamed such reporters in turn for appearing to reject Wolf’s blunt but honest jokes about the media industry.

Talev went on to write that she and future president Oliver Knox “recognize these concerns and are committed to hearing from members” regarding Wolf’s monologue. She also wrote that Wolf missed the mark with her comments, and that the monologue was “not in the spirit” of offering “a unifying message about our common commitment to a vigorous and free press while honoring civility, great reporting and scholarship winners.”

Talev stated the monologue was not intended “to divide people.”

“Every day we are working hard to advocate for our members and ensure coverage that benefits the public, and the dinner is an important opportunity to highlight and maintain our essential work,” Talev concluded. “The White House Correspondents’ Association remains dedicated to that mission.”

Wolf, meanwhile, hasn’t apologized for her set, but has denied taking hits at Press Secretary Sarah Huckabee Sanders’ appearance, and has liked the following tweets about her monologue:

They’re fucking pathetic. You were great!

Dear "the media" – @michelleisawolf was FUNNY. Hire a juggler next year.

Kudos to @michelleisawolf for making the #WHCD circle jerk as painful and awkward is it deserved to be.

Few people go to DC and accomplish what they set out to do while staying true to themselves. @michelleisawolf is one of those people.