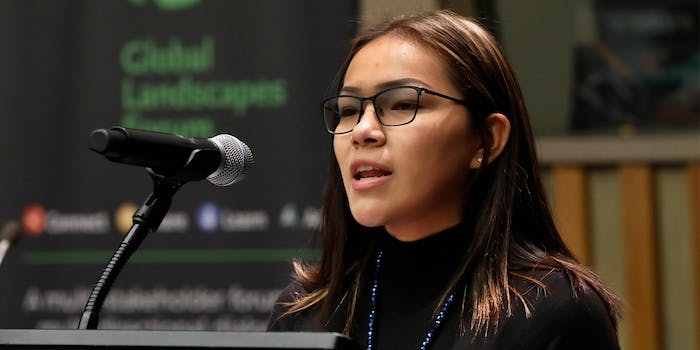 Here's everything you need to know about the 'water warrior.'

After Greta Thunberg led a highly successful Global Climate Strike and made a tearful United Nations speech, just about everyone is familiar with the 16-year-old environmental activist from Sweden. But as many folks on Twitter have pointed out, she’s not the only teen making big differences with environmental advocacy. Here’s everything you need to know about 15-year-old Autumn Peltier, the “water warrior.”

Who is Autumn Peltier?

Autumn Peltier is an indigenous clean water advocate from the Wiikwemkoong Unceded Territory, a First Nation reserve on Manitoulin Island in Ontario, Canada. Peltier has been lauded as a “water warrior.” In April 2019, when she was 14, Pelier was named the chief water commissioner by the Anishinabek Nation, a political advocacy group for the 40 First Nations across Ontario. The teen activist has been invited to the Children’s Climate Conference in Sweden, has spoken at the U.N. twice, and has met with Canadian Prime Minister Justin Trudeau to discuss clean water concerns. Peltier said in her 2019 U.N. speech that her water advocacy was inspired by her great aunt Josephine Mandamin, who held the title of chief water commissioner before her.

Peltier was invited in 2018 and again in 2019 to speak in front of the U.N. about the sacredness of water. There, Peltier spoke about the lack of access to clean water on many Canadian reservations.

“All across these lands, we know somewhere where someone can’t drink the water,” Peltier said in her 2019 speech. “Why so many, and why have they gone without for so long?”

Peltier also spoke about the beliefs her ancestors passed down to her about the importance of water.

“When you ask the question about ‘why is the water so sacred?’ It’s not just because we need it and nothing can survive without water,” Peltier said. “It’s because for years and years our ancestors have passed on traditional oral knowledge that our water is alive and our water has a spirit.”

Peltier concluded her 2019 speech by asking for an end to plastic use and a return to the “old ways.”

Young advocate with a big voice

Peltier has been advocating for clean water since the age of 8. Inspired by her great aunt, she began speaking at community events and quickly gained recognition for her advocacy. At the age of 12, she was invited to the Assembly of First Nations’ annual winter meeting where she presented Trudeau with a ceremonial copper water bowl, meant to serve as a reminder of his responsibility to protect the country’s water.

According to a BBC report, Peltier tearfully handed over the bowl and said, “I am very unhappy with the choices you’ve made.”

Trudeau has been criticized in the past by both indigenous and environmental advocates for his support of multiple pipeline projects across Canada.

“He knows what my concern is and he knows what he has to fix and protect,” Peltier told BBC at the time.

Peltier has been nominated for a slew of awards, including the International Children’s Peace Prize and the Ontario Junior Citizen Award. In 2016, she was given Canadian Living’s Me to We Award for youth. In 2017, Peltier was named a top 30 under 30 leader making a difference by the North American Association for Environmental Education.