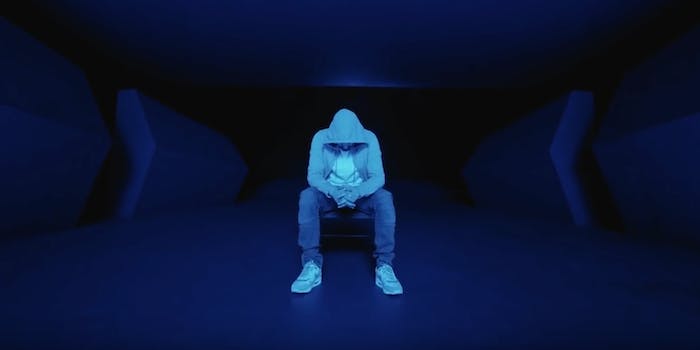 Eminem responds to critics: ‘This album was not made for the squeamish’

The Detroit rapper has been criticized over lyrics relating to numerous mass shootings.

Eminem stayed true to himself, and theme, this week in defending the material on his latest album, the Alfred Hitchcock-influenced Music to be Murdered By.

Reviews for the album have settled into a range from middling to slightly above average. Responding to many who’ve allegedly misinterpreted lyrics throughout the surprise album, especially those relating to gun violence, the Detroit rapper (born Marshall Mathers) had a message, in the Hitchcockian tone:

“This album was not made for the squeamish,” he tweeted on Thursday. “If you are offended or unnerved at the screams of bloody murder, this may not be the collection for you. Certain selections have been designed to shock the conscience, which may cause positive action. Unfortunately, darkness has truly fallen upon us.”

“Cause, see, they call me a menace and if the shoe fits, I'll wear it. But if it don't, then y'all will swallow the truth, grin and bear it” #Renegade #MusicToBeMurderedBy pic.twitter.com/2aIFk2kz8a

He continues, suggesting listeners aren’t picking up what he’s put down: “These bars are only meant for the sharpest of knives in the drawer. For the victims of this album, may you rest peacefully. For the rest of you, please listen more closely next time.”

The lyricist has been criticized over lyrics relating to mass shootings.

The somewhat cumbersome “Darkness,” though, is the track that has drawn significant ire or praise, as he implicitly implores more considerable attention to soft gun laws. A disturbing look at gun violence, the song is rapped through the gruesome point of view of 64-year-old Stephen Paddock, the perpetrator of the 2017 Las Vegas mass shooting.

The real motives of the Vegas shooter remain unknown, but Eminem shows Paddock as a troubled man, “loathing in Las Vegas” and enabled by the United States’ gun rights: “I got ammo for all the hecklers, I’m armed to the teeth … Finger on the trigger, but I’m a licensed owner / with no prior convictions, so loss, the sky’s the limit.”

In the past, Eminem has made numerous recordings about killing his enemies. In the age of social media, it seems to have struck a bigger nerve.