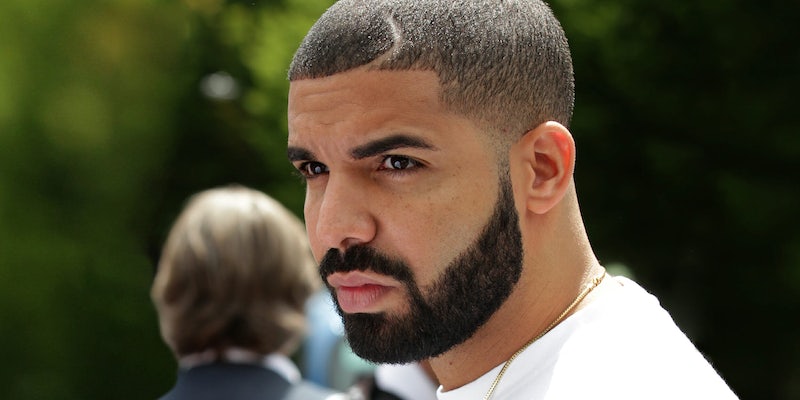 The rumors are boiling over.

As Pusha’s accusation goes: “Adonis is your son / And he deserves more than an Adidas press run.”

He adds: “Sophie knows better, ask your baby mother, cleaned her up for IG but the stench is on her… You are hiding a child.”

Brussaux’s Instagram handle was @sophieknowsbetter, but it’s been made private as of Tuesday and changed to @sophieb.

On Friday, Drake released “Duppy Freestyle,” which attacked the street credibility of Pusha T’s drug-dealing past, and also Pusha’s G.O.O.D. Music record label co-worker, Kanye West. This was after Pusha reignited his feud with Drake on “Infrared,” where he attacks Drake for hiring a co-writer to work on his raps. The two have been feuding on and off since the mid-2000s, when Drake’s mentor Lil Wayne clashed with Pusha T’s crew, Clipse.

Pusha also posted an old photo of Drake donning blackface for a photoshoot late Tuesday. Drake was a big fan of Little Brother as a young rapper and rap fans have noted that his early work borrows some cues from that oft-forgotten rap collective. It’s likely the blackface pics were intended as an artistic statement about hip-hop as modern-day minstrel entertainment that’s commodified by America; Little Brother’s 2005 album The Minstrel Show played with similar themes.

Speaking to radio show The Breakfast Club on Wednesday, Pusha said he has no regrets over the Twitter turmoil that this feud has caused. Pusha added that he has more “content” should Drake continue to escalate this feud.

Update 7:17am CT, May 31: Drake in an Instagram story wrote that the blackface photo came from a 2007 photoshoot and was intended to be an art project about how Black actors are pigeonholed and denied opportunities in entertainment that don’t align with traditional roles forced on them.