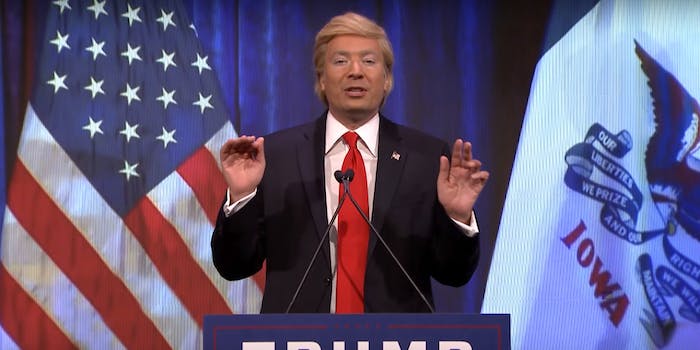 'The J stands for jenius.'

Donald Trump isn’t taking his second-place finish in the Iowa caucus too well.

He’s accused the victory, Sen. Ted Cruz (R-Texas), of stealing his victory after Cruz’s campaign released a misleading statement about Ben Carson. Trump has also called for a new caucus, referenced spending the least amount of money per vote in Iowa, and tried to convince everyone that second place is a good thing—unlike a certain tweet of his from 2014 that recently resurfaced.

It’s that last technique that earned him some help from Jimmy Fallon.

Fallon, who’s been impersonating Trump for much of his campaign—even to Trump’s face—brought out the impression again to address Trump’s supporters following the Iowa caucus.

Yes, Trump didn’t win, but that isn’t so bad. On The Tonight Show, Fallon, as Trump, demonstrated just how much better finishing second really is. After all, there isn’t an R1-D1, so arguments about first place being the best are invalid.