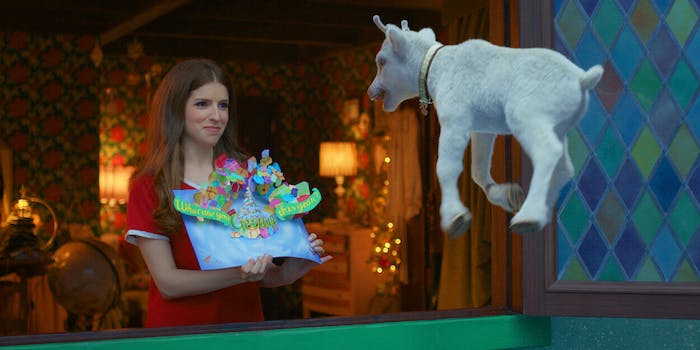 Disney+ is launching with all the big guns: Star Wars, Marvel, the Disney Vault, and a delightful mid-budget Christmas movie called Noelle. Starring Anna Kendrick and Bill Hader, Noelle is the sleeper of the bunch. Because while your friends might have hit up Avengers: Endgame‘s midnight premiere, Noelle is the Endgame of post-Thanksgiving dinner. Disney focuses its crowd-pleasing hive mind on the world of Hallmark movies, with surprisingly strong results.

Part melodrama and part family comedy, Hallmark movies have become their own subgenre. They have their own tropes: struggling family businesses, earnest monologues, unrequited love, long shots of people nodding knowingly. They’re earnest to the point of absurdity, and they treat death with a soap opera-like flippancy. Even if you don’t enjoy Hallmark movies, you have to respect that they’re an art form. But up until Noelle, it’s an art form that’s never been allotted a decent budget.

Any fan of genre cinema knows that when budgets increase, storytelling possibilities open up. For Noelle, that means a CGI dancing baby reindeer and the first Hallmark-style movie with what can be described as “action sequences.” Instead of a movie about the heiress to a cookie company stopping a venture capital firm from buying out the factory and ruining a small town’s Christmas, we get the daughter of Santa trying to save Christmas for the whole world. The stakes have been raised.

Noelle’s plot is simple, yet well mined for comedy gold. Kendrick and Hader play Noelle and Nick Kringle, the daughter and son of Santa Claus. Noelle has dedicated her entire existence to Christmas, but when Santa dies, it’s her slacker brother, Nick, who inherits the red hat. Noelle urges Nick to take a weekend vacation to come to terms with being Santa, but instead, he goes into hiding in Phoenix. With the days counting down till Christmas, it’s up to Noelle to save the holiday for children everywhere.

Anyone who’s seen a made-for-TV movie knows how this goes. Families learn lessons, cynics learn the meaning of the holidays, and everyone lives happily ever after. Noelle takes these tropes and mixes in a feminist take on the Santa myth. It’s sweet and changes nothing about the story of Santa, but earns the film a tear-jerking moment in the end.

The biggest surprise of Noelle is how funny it is. Beyond one running gag that’s essentially an ad for the iPad, the film is an honest-to-God riot. Kendrick is a delight as Noelle, a grown woman who is out of her element but never depicted as stupid. While comparisons to Elf are natural, Noelle lacks that film’s silliness. Buddy the Elf is a glorified child, but Noelle is a smart and capable woman who’s just never left the North Pole.

Noelle’s exasperated, type-A personality plays beautifully against Hader’s yoga-obsessed Nick, a nervous trainwreck who doesn’t want to be Santa. While the siblings try to work things out in Phoenix, their cousin Gabe (Billy Eichner) steps in as temporary Santa. Gabe is a Silicon Valley-style tech guru who uses algorithms to decide if children are naughty or nice with horrific results. It’s Ayn Rand with sleigh bells.

At times, the melodramatic scenes—such as a homeless mom raising her deaf daughter in a shelter while hunting for a job—contrast jarringly with the broader comedy. But the odd stylistic swings are part of the charm of these movies. Over the course of 90 minutes, you’ll laugh, you’ll cry, you’ll feel your heart swell, and you’ll giggle too much whenever the flying CGI reindeer appears. It’s comfort food.

Noelle won’t be written about in the great lineage of classic Christmas movies, but that doesn’t mean it won’t be a classic. Families will huddle around the TV to watch it for years to come. College students may laugh about it and watch ironically, but they’ll still watch it nonetheless. It’s a joyful way to spend 90 minutes that made me tear up twice and want to call my mom.

Are there flaws? Of course. There are plot holes, sloppy transition shots, and a few moments of earnestness that push the boundaries of reality further than flying reindeer. But everyone who sits down to watch this movie already knows to expect those things, so can we really call them flaws? Whenever I point them out to my mom, she says, “Oh, shut up, they’re nice.” That’s just as valid a defense as any criticism I could lob. If you find these movies awful, you won’t have a good time with Noelle. But don’t try to rain on the parade of folks who like them. In the words of Ms. Bond, “Shut up, they’re nice.”