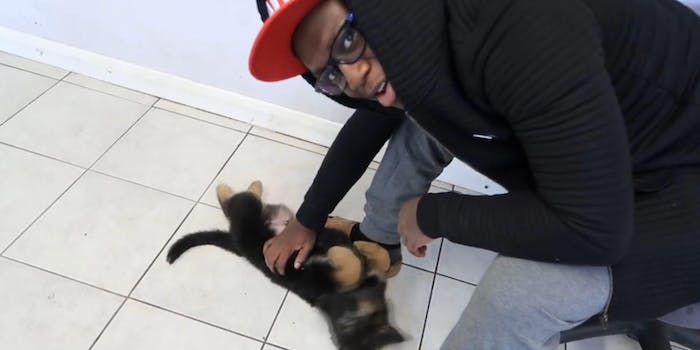 Will Deji get to keep his pet?

YouTube star Deji, the younger brother of KSI, admitted blame for an out-of-control dog that allegedly attacked an elderly woman. Deji—whose full name is Deji Olatunji—tried to restrain his dog after his mother let it out of her house in July 2018, but it bit an older woman twice and gave her, according to the judge presiding over the case, “very nasty injuries,” the BBC reported.

Deji, it seems, has changed his mind over this incident.

Last year, Deji released a video titled “THE POLICE STOLE MY DOG” and described how the local authorities took his German Shepherd named Tank after he “nipped at” a neighbor. In the video, Deji also said the woman who was attacked had been provoking the dog.

He and KSI even promoted a change.org petition to “save our dog Tank.” More than 440,000 people had signed the online petition.

According to the petition, Deji’s “neighbor came on to their property to pick up her parcel that they had collected on her behalf. The neighbor had known Tank since he was 10 weeks old. Tank ran out to play with her but she reacted aggressively by shouting, screaming, and hitting the dog constantly with the parcel. Due to her hitting their dog, he sustained cuts and bruises to his face and this resulted in Tank nipping her once. She later called the police called and requested that the dog should be euthanized.”

At the time, Deji also claimed the police were training Tank to become a K9 officer. Police denied that.

Officers charged 22-year-old Deji and his mother, Olayinka Olatunji, with two counts of owning a dog that was dangerously out of control. Olayinka Olatunji has already pleaded guilty to the charges, according to the BBC.

In a video published last week, Deji said he was getting Tank back following his court appearance. “I promise you that,” he said.

Deji has 9.8 million YouTube subscribers, and he’s courted controversy online for the past few years, feuding with Jake Paul (and losing to him in a YouTube boxing match). He’s constantly fighting with his brother, as Deji has accused KSI of bullying him and sexually betraying him while KSI was livid when Deji released some of KSI’s bank statements. All of it caused Deji to hemorrhage YouTube subscribers at the time.

According to the BBC, Deji and his mother will face punishment from the court next month.