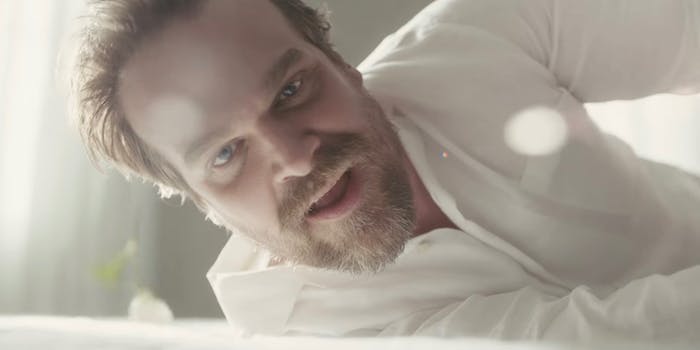 It takes an astounding amount of effort for advertisers to capture audience attention during the Super Bowl nowadays, but Tide kept viewers on their toes with a series of fourth-wall-breaking ads full of callbacks.

The first commercial arrived early in the game as Stranger Things star and retweet connoisseur David Harbour parodied a number of Super Bowl commercial tropes. He encompassed everything from a high-end car commercial, soda and beer ads, and something more sensual before twisting it around; no matter the set-up, it was all a Tide ad in disguise, centering on everyone’s clean clothing.

If Tide and Harbour had left it at a single ad, they would’ve had one of the most amusing of the night. But then Harbour showed up again and again in follow-up ads that would air during every quarter. He was on a horse with Old Spice spokesperson Isaiah Mustafa. He used his expert dance moves to take over for Mr. Clean. He even got in on a medicine commercial. But in the end, they were all Tide ads, and once viewers realized the set-up, they started to expect Harbour to show up at any minute.

It wasn’t too far off to suggest that the Super Bowl itself was just one giant Tide ad. To be fair, the new championship T-shirts worn by the Philadelphia Eagles after the game were very clean so you never know.

Plot twist: the Eagles win the Super Bowl, Goodell comes down to hand off the trophy. Nick Foles takes the stage and removes his helmet. But it’s not Nick Foles, its Chief Hopper. The entire game was a Tide ad.