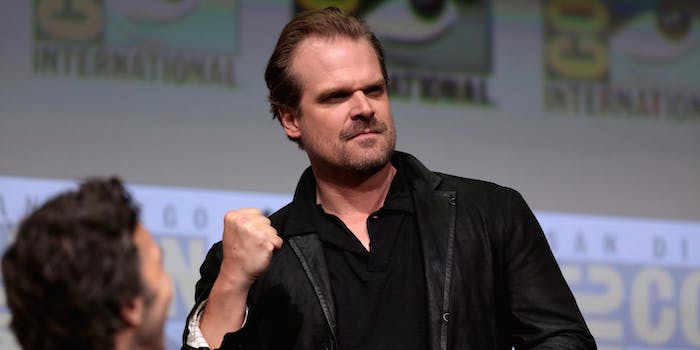 He's good on his word, too.

Stranger Things star David Harbour is in high demand these days between TV, film, and keeping promises to fans, but now another fan is aiming to get Harbour to attend a special day—for the right amount of retweets.

Just days after photos emerged and revealed that Harbour posed with a fan for her senior portraits with a trombone in hand after her request was retweeted more than 25,000 times, a fan named Ericka asked Harbour if he would officiate her wedding this September.

What would it take to get @DavidKHarbour to be the Officiant at my wedding in September?!

Harbour saw her request and responded that he would do it (Stranger Things season 3 schedule permitting) and even put in the effort to get ordained for the occasion if Ericka was able to meet a number of conditions. He upped the number of retweets for him to fulfill the request from 25,000 to 125,000 retweets. During the ceremony he wants to “read an esteemed love letter of my choosing,” and when it finally comes to cut the wedding cake he wants to cut to the front of the line and get the first piece—even ahead of the newly married couple.

125k retweets. Provided date works with s3 shooting schedule, I will get ordained and perform ceremony. I get to read an esteemed love letter of my choosing, and after the cake is officially cut, I get the very first piece. #allthecakes https://t.co/rSku8qD7uT

Ericka’s request has more than 37,000 retweets while Harbour’s response has more than 51,000 retweets as of press time with several months to go until the wedding date, so achieving it is certainly possible. And if Ericka manages the feat, we already know that Harbour is good on his word.

Update 9:09am CT, Jan. 18: Harbour’s post listing his conditions to officiate Ericka’s wedding were met in less than 24 hours after Harbour’s tweet was retweeted more than 125,000 times, a time that surprised even him. The next time a request comes around, Harbour plans to make it even harder.

Dammit. Not even 24hours. You’re kidding me. @ErickaElizabth DM me please to get the ball rolling. I’m making it seriously hard next time, internet, this is not over between us… https://t.co/Ht0kDCl5hz

However, he was willing to (somewhat) concede one of the stipulations. Although he is still demanding the first piece of wedding cake, he’ll let the newly married couple cut the cake and do what they want with it first.

I will allow the smearing of it on each other’s faces, licking icing off fingers and all other bride and groom cake shenanigans, but the actual first whole piece is mine, dammit. https://t.co/8NKZtbQfHS