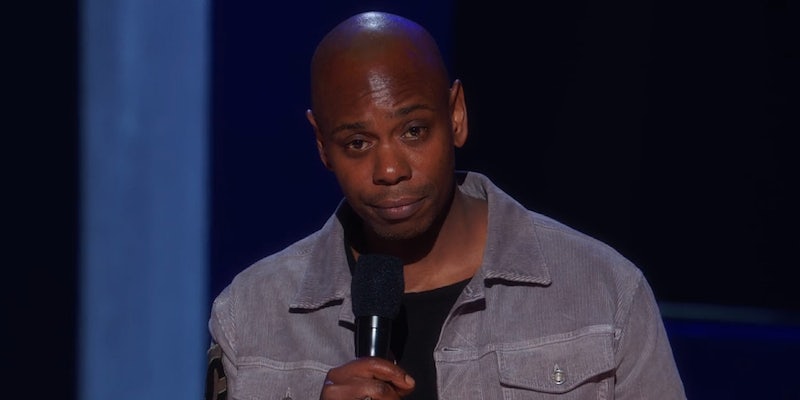 Fan whose letter Chappelle uses in special speaks out against comedian

He says he became part of the joke. Now he's pushing back.

After being called out for transphobic material in past few years—riffing on Caitlyn Jenner and rolling his eyes at the trans community’s “sensitivities”—Dave Chappelle is only alienating people further with his latest Netflix specials. Now one fan, who says he became part of the joke, is pushing back.

In Equanimity, Chappelle jokes about a letter he received from a fan addressing his belittling jokes about the trans community. In one breath, he says that being trans is “fucking hilarious” and equates being trans with Rachel Dolezal, but he also admits that he was affected by the letter—in a sorry-not-sorry kind of way. “When I read this letter, this shit made me feel bad,” he said in the special. “I didn’t feel bad about what I said, you understand, I felt bad that I made someone else feel bad.”

The fan in question is apparently Tyer Foster, who posted a blog on Tuesday addressing the interaction—receipts and all. Foster says he caught Chappelle live in Seattle March 2016 and was prompted to write Chappelle after a heated round of transphobic jokes. As he writes:

He began by deadnaming and misgendering [Caitlyn Jenner], reminiscing about seeing “Bruce on the Wheaties box” as a child, with his retrospective horror at admiring a trans woman serving as the punchline. He trashed the notion that trans people experienced similar or worse types of discrimination as the black community. Finally, he closed the subject with an imagined scene about a trans woman “tricking” a man into having sex, a familiar transphobic trope. Throughout, Dave used the slur “tranny” instead of “trans.”

Chappelle wrote Foster back with empathy. But the jokes continued. “I really am grateful that people like you hold me in high esteem. I’m not perfect, but I do care,” Chappelle wrote. (Foster uploaded the handwritten letter to his Medium blog.)

But Foster, who is not transgender, is upset that little has changed in Chappelle’s standup acts and that his letter became setup to another transphobic joke—this time in a Netflix special with an international audience.

Chappelle needs to realize is that while a comedian has no obligation to tell the truth about themselves with their material, the 180-degree difference between his comments to the Washington Blade (“I’m not an obstructionist of anybody’s lifestyle, as long as it doesn’t hurt me or people I love and I don’t believe that lifestyle does.”) and his current material — which is hurtful in exactly the same way he claims struck a chord with him — is impossible to resolve.