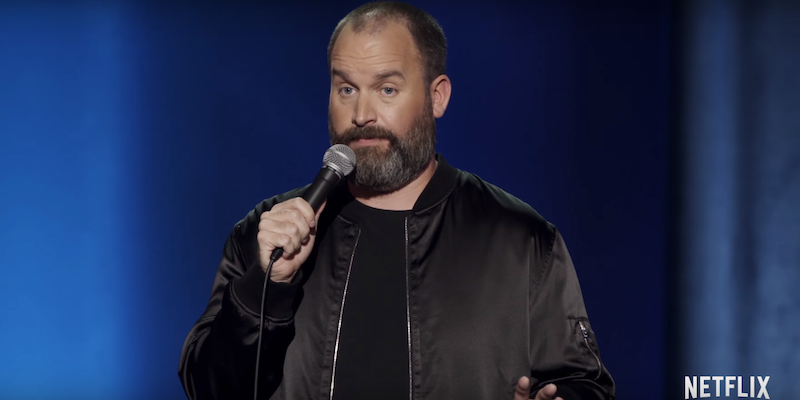 It's a loaded time to be a straight, male standup.

It’s a loaded time to be a straight, male standup.

In an era where Time’s Up, #MeToo, and reports of sexual misconduct dominate the culture, it can feel like overkill to log on and sit down with a spotlight on one singular male perspective for an entire hour. But this massive sea change has also created a set of circumstances that can be powerful for comedy in the right hands, and comics like Tom Segura are trying to lean into it.

Segura is by no means a political comic. In his new standup special Disgraceful, which landed on Netflix Friday, he spends most of his time focusing his personal, observational lens on a familiar range of topics: his recent weight loss, becoming a new dad, buying porn for his friends back when he was an old-looking teen. If you enjoyed Segura’s 2016 special Mostly Stories, there’s plenty for you to sink your teeth into here. But he also seems acutely aware that in 2018, an American comedian can’t really upload a one-hour performance to a major streaming service without addressing our broader cultural climate in some way. Like Dave Chappelle did in his own Netflix specials earlier this month, Segura seems both tickled at how quickly our standards of behavior can change, and juuust a little nostalgic for the era we’ve left behind—not that there’s anything wrong with the present, though.

Within his first 10 minutes onstage, Segura pivots out of talking about fast food with the segue: “You can’t say ‘retarded’ anymore. It was just here. Remember?” The audience in the jam-packed Denver theater responds with a burst of recognition and a smattering of oohs. Like Chappelle, Segura was born in the ’70s and is grappling with the pace at which certain parts of his point of view are being challenged. “You didn’t say it like that,” he continues, explaining that the slur always seemed more popular to him as slang than it did as a diagnostic label. “You said it to describe an idea or a situation.”

But where Chappelle used his observations to launch a flawed crusade against political correctness (to the chagrin of his fans), Segura takes a different tack and invites his audience to give him a taste of his own medicine: “You might be sitting in your seat now going, ‘Tom, what can we still say?’ I’ll tell you what you can say. White racial slurs.” The audience roars.

Segura goes on to list a bevy of archaic terms for various white ethnic groups that have been used during various immigration waves in the U.S., and jokes that if you called any white person those words today, they’d probably laugh along with you.

And just like that, he unlocks subtext Chappelle seemed to be getting at too: Updating our attitudes and policies is seriously important work, but there’s a lot to be unpacked in the intensity of our reactions. If someone gets violent for being called a honky, Segura thinks that’s weird behavior. In fact, he bets you that person is probably a racist themselves. And while he seems to agree it’s for the best that words like retarded and “gay” are no longer being used the way he used them in middle school, he also invites us to look at how vigilant we’re being—and why.

All of this happens in the same approximate five-minute stretch during the special. It isn’t the funniest material in Segura’s hour, but it’s also by far and away the most volatile subject matter he touches on, and in less deft hands those jokes could have gotten dicey. Not only does Segura leave his premise having examined his own problematic attitudes (one impression he does of a British woman waking up from brain trauma with a Chinese accent reads a lot like… an excuse to imitate a Chinese accent, a critique he anticipates and challenges), he leaves the social commentary portion of his program as good-naturedly as he entered, and returns to talking about changing diapers and jacking off for the majority of his hour. Where Chappelle took the position of, “I didn’t come here to be right, I came here to fuck around” and ran headlong into territory he may not fully understand, Segura seems to be saying, “I know these words can have power, especially for people who may not share all my traits, and I respect the boundaries being drawn. But let’s not forget we ultimately have control over how and when we use our power, and that’s important to look at too.”

Men of a certain age will most likely be grappling with these ideas for some time to come, and while Segura’s isn’t a searing academic analysis, his approach is more nuanced than his chosen subject matter might lead you to believe. And in 2018, that’s saying something.