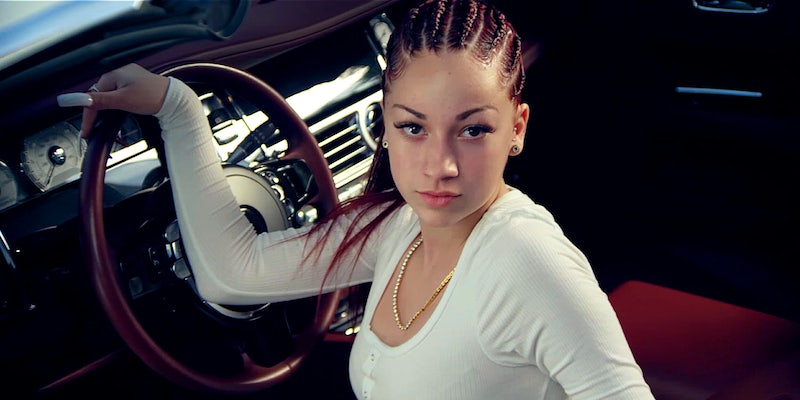 The meme turned rap star is an American original.

The Daily Dot aims to cover the internet’s memes and viral stars with empathy and humanity. Our readers loved to hate Danielle Bregoli in 2017, but she’s a distinctly American success story.

No one moved the needle like Bregoli in 2017, and that’s why the “Cash me ousside” teen turned Bhad Bhabie, would-be rap star, is our Internet Person of the Year.

She began as a living meme—no different than any Chewbacca Mom who does something funny and garners attention. Speaking to Dr. Phil in September 2016, she told dissenters they could catch her outside (and presumably fight). We laughed at this long enough for Bregoli to roast David Spade on Instagram and tell us what she thought about James Comey getting fired as FBI director. She even announced, then scrapped, a tour that revolved around her fleeting “Cash me ousside” catchphrase. It was the best decision of her career.

Turning inward and focusing on music, Bregoli’s Bhad Bhabie moniker emerged in August with fun and charismatic hip-hop that appropriated Black culture with good choruses. Our readers overwhelmingly hated songs like “These Heaux,” but as our internal traffic showed, they also couldn’t get enough. By mid-September, she was signed to Atlantic Records. (Atlantic declined to make Bregoli available for this story.)

If 2017 popularized the “Milkshake Duck,” slang for a viral person immediately adored but soon revealed to harbor politically shaky views, then Bregoli is the reverse Milkshake Duck. She was young and foolish, an easy dunking target for the Twitter gallery. But her character proved to be surprisingly strong for a 14-year-old; hell she just gave $65,000 to her mom for Christmas.

We wondered if her internet success stems from a resentful disdain for the sustained prevalence of hip-hop. It runs circles around other genres as the most popular among teens in the U.S., and Bregoli affords many the luxury to openly condemn Black culture without, you know, being outwardly racist.

The corollary is that Bregoli is reflective of young Americans everywhere. As Eminem once rapped on “The Real Slim Shady”: “There’s a million of us just like me, who cuss like me, who just don’t give a fuck like me. Who dress like me—walk, talk, and act like me.”

As much as suburban parents may wish, Bregoli is no outsider artist. The breakout rap star is pure id—any Wi-Fi connected Generation Z kid could be her. She is Mother Nature’s daughter—a child born of vlogs and Migos’ “Bad and Boujee.” And that’s great because the kids are fine.

Bregoli speaks to the universal fun of reckless teen angst. Her music shows agency and a welcome subversive streak. U2’s Bono recently caught backlash for saying that today’s music could use more “testosterone.” I think what he meant to say is that Imagine Dragons suck, but he should have been listening to “Hi Bich.”