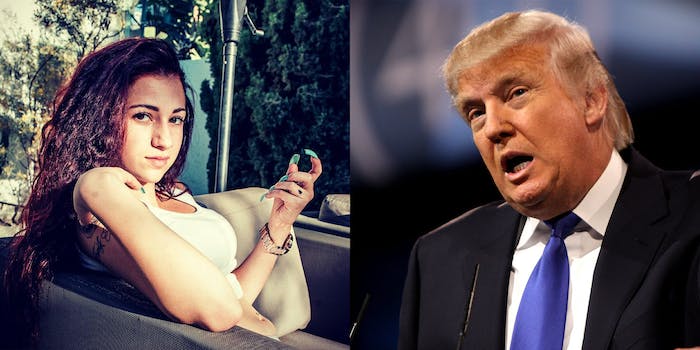 President Donald Trump’s firing of FBI Director James Comey Tuesday evening is perhaps the biggest story in American politics since Watergate, and what happens in the coming months will reverberate throughout our nation for at least the next few years, if not the next several decades.

Just about everyone is weighing in on the momentous inflection point in Western democracy, and we at the Daily Dot figured we should speak with the people who lived through America’s last constitutional crisis.

Unfortunately, pretty much everyone who was intimately involved in Watergate is dead. So instead we asked the Cash Me Ousside girl, Danielle Bregoli, what she thought about it all. What follows is a very brief conversation.

What do you think of Donald Trump firing James Comey?

Didn’t Donald trump fire people all the time on that show? I’m not surprised.

Did what Donald Trump do qualify as cashin James Comey ousside?

Nah. He basically just sent him ousside (of the White House) lol

Trump apparently cashed Comey after he requested money to investigate Trump? How wack and/or dope is that?

Oh so he tried to finness him?

Are there any other government officials you want Trump to cash?

Who would you hire to replace Comey as head of the FBI?

I’m gonna have to go with…. Kodak Black.

How do you feel about Trump in general? Do you have any words of advice for him?

Get your shit together. Howbow dah

Do you think the Trump campaign colluded with Russia?

If he did, what should be done about it?