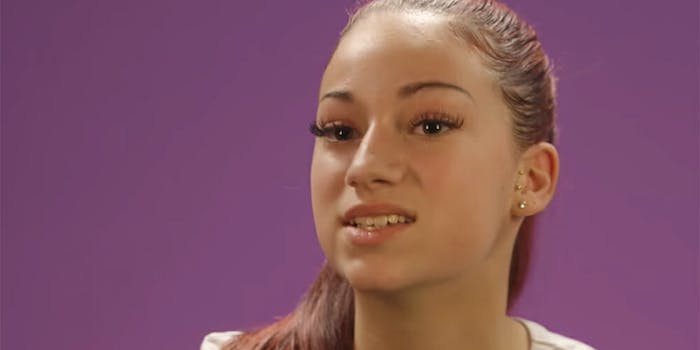 Danielle Bregoli, aka Bhad Bhabie, is finally getting a reality TV show

Danielle Bregoli, aka Bhad Bhabie, aka the 15-year-old rapper who launched to fame after an appearance on Dr. Phil, is finally getting a reality TV series of her own, TMZ reported on Tuesday.

Bregoli signed a deal with Invent TV for a docuseries that will focus on her personal life (as Danielle Bregoli) and her music career (as Bhad Bhabie). Filming for the pilot began Saturday at the first show of her national tour, and it’s expected to be shopped around to all the major cable networks.

It’s not the first time the “cash me ousside” teen has considered TV, but according to TMZ, she nixed a previous deal with a major production company to focus on her rap career.

It was probably a smart move: Two of her songs have made it to onto the Billboard Hot 100, and “Hi Bich” went gold. Bregoli was also just nominated for top rap female artist at this year’s Billboard Music Awards alongside Cardi B and Nicki Minaj (though not without controversy).

But successful start to her music career aside, Bregoli almost certainly has the chops and entertainment value necessary for reality TV. Just this weekend, a video went viral of the teen throwing punches at Instagram star WoahhVicky. And don’t forget: Bregoli initially catapulted to meme fame for behaving like a brat on Dr. Phil.

We can’t wait to see what antics she brings to her own TV show.