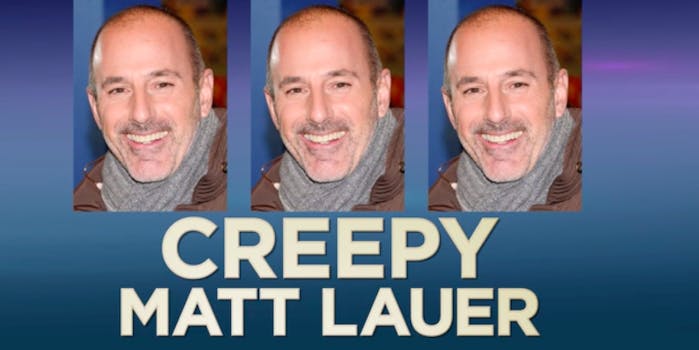 This was a red flag.

Following recent news of Matt Lauer’s termination from NBC News and the Today show for alleged inappropriate sexual behavior, many are digging into older footage of the news anchor to find evidence of the claims.

Conan O’Brien, however, was ahead of the recent domino effect. A 2014 clip from his show Conan shows Lauer speaking to an Olympic athlete.

The video resurfaced on Reddit earlier this week under a post titled “Conan knew about Matt Lauer.” The interview shows a moment from the 2014 Winter Olympics in Sochi, Russia, where Lauer congratulates athlete Rosa Khutor on her world championship, emphasizing her young age (she was 18).

The clip cuts to the end of the interview, where Khutor smiles and says, “Thank you, it was nice talking to you,” to which Lauer pauses and responds with a slow grin.

In an extended version of the clip, the video cuts back to the O’Brien, and the late-night show host laughs knowingly. The camera pans to Andy Richter who says, “I don’t think we’ve ever been more fair.”

Lauer isn’t the first person whose past was dredged up following allegations of sexual misconduct. Clips of celebrities talking about Harvey Weinstein in late-night show interviews seemed particularly ominous after more than 60 sexual assault allegations were made against him.

The initial, detailed complaint against Lauer describes sexual misconduct toward a former employee which began during the Winter Olympics and continued for several months after.