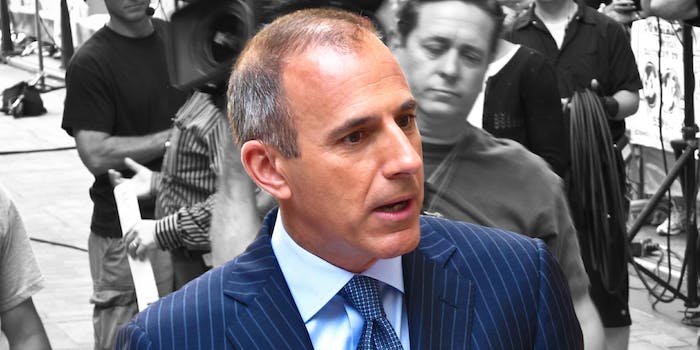 Other journalists report that Lauer's behavior was well-known.

NBC News fired Matt Lauer on Wednesday after an employee filed a detailed complaint of “inappropriate sexual behavior in the workplace.”

Lauer has been a full-time host on the Today show since 1994. According to a memo to staff from NBC News chairman Andrew Lack, the sexual harassment complaint filed against him was the first against him during his career at NBC. However, Lack wrote “we were also presented with reason to believe this may not have been an isolated incident.”

Opening Wednesday’s episode of the Today show, Savannah Guthrie announced Lauer’s departure and read Lack’s memo, saying she was told of the firing moments before going live. Guthrie said she was heartbroken for Lauer and for the woman who came forward with her account of harassment, saying women are “long overdue” to feel comfortable coming out against abusive men.

Hard to overstate what a bombshell #MattLauer’s dismissal is for US TV. 2 of 3 network morning show Tv hosts gone in just over a week. pic.twitter.com/Z0qFaZCMoh

On the show, Hoda Kotb said she loved Lauer “as a friend and a colleague,” and that “it’s hard to reconcile the man who walks in every day” with the person Lauer’s accuser filed a complaint against.

However, this tweet from HuffPost editor Chloe Angyal reveals that Lauer’s alleged behavior was an open secret.

Journalist Yashar Ali also tweeted that he and other reporters were aware of “several women” who had come forward with allegations against Lauer but weren’t willing to go public.