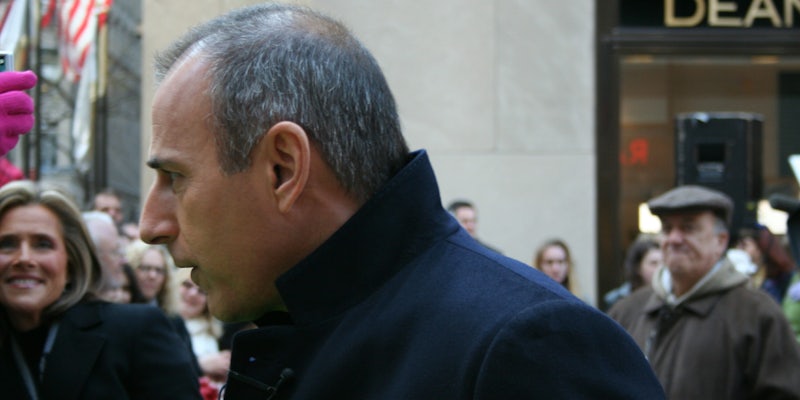 Matt Lauer is gone, but the damage is already done

Matt Lauer is powerful. Make no mistake about that.

Lauer, who became a co-anchor on Today in 1997, was fired from NBC on Wednesday after a sexual harassment complaint was deemed credible, severe even, by the network. For some, he will be sorely missed.

That’s because Lauer has been the voice of American morning news for the past 20 years. Whether in New York or Los Angeles, Boise or Houston, Americans woke up, turned on NBC, and learned the daily headlines through Lauer’s authoritative presence. Young kids grew up with him, stay-at-home parents thought he was charming. He was there for Americans during 9/11, mass shootings, Olympic victories. He had access to prominent world leaders, politicians, and celebrities. As the de-facto face of NBC News, he had the utmost authority.

In light of the multiple sexual harassment allegations that have surfaced since his firing this morning, it’s clear that his authority came with influence that more often than not was harmful to women—both in the newsroom and the world at large.

Journalists don’t tell people how to think, but they certainly set the agenda for what we think about. Even in the age of the internet, very few people have as much power over Americans’ conversations as the TV anchors we’ve grown older with.

So when Lauer sits down with Joe Biden or Kanye West and interviews them on live television, the questions he asks and the tone he uses sets the stage for how others think and talk about his subjects. When Corey Feldman began raising money to create a documentary exposing an alleged Hollywood child abuse sex ring last month, Lauer threw loaded questions at him, encouraging Feldman to go to the police instead of interviewing with Today. Reporters quickly mirrored Lauer’s points, with the Washington Post rationalizing Lauer’s skepticism.

Corey Feldman reminding Matt Lauer not to blame the victim.pic.twitter.com/bEonmmqv9C

Conversely, when Lauer had Bill O’Reilly on the show after the former Fox News anchor’s sexual harassment accusations piled up, the Today host backed down from picking apart O’Reilly’s logic, ultimately letting the accused anchor defend himself before promoting his new book. Side-by-side, Lauer’s handle on O’Reilly looks soft compared to his criticisms directed at Feldman, who is a child sexual abuse victim.

“Over the last six months since your firing, have you done some soul-searching?” Lauer asked O’Reilly. “Have you done some self-reflection, and have you looked at the way you treated women that you think now, or think about differently now than you did at the time?”

That’s not a loaded question. It’s a sympathetic one. Lauer threw a line to O’Reilly, giving the anchor an opportunity to redeem himself. A heart-to-heart between Lauer and an alleged sexual harasser is the last thing survivors across America needed to wake up to on Today.

To the average American, Lauer looked a lot like an objective neutral party attempting to press his subjects for more answers. Until, perhaps, the 2016 election.

Lauer served as host and moderator for the NBC presidential forum in September 2016, where he hosted 30-minute interviews with both then-presidential candidates Hillary Clinton and Donald Trump. And during the segment, Lauer treated Trump, who had been accused by over a dozen women of harassment, along with having said many racist things on the campaign trail, with a light touch, while he relentlessly grilled Clinton on a single issue—her private email server.

“There’s a difference between an interviewer who has questions and one who has knowledge, and Mr. Lauer illustrated it,” James Poniewozik wrote of the forum for the New York Times. “He seemed to be plowing through a checklist, not listening in the moment in a way that led to productive follow-ups. Short on time, he repeatedly interrupted Mrs. Clinton in a way he didn’t with Mr. Trump. (“Let me finish,” she protested at one point.)”

The way Lauer treated Clinton is particularly striking, simplifying her candidacy down to her emails and limiting her answers to the point of exasperation. Meanwhile, Lauer lobbed softball after softball at Trump, and he even let the future president claim that he did not support the war in Iraq when he actually did. Why treat Clinton so harshly and then let Trump use national television to spread lies?

“To knowingly allow false information to spread via your airwaves to millions of people is to fail the first and most important obligation of journalism,” Quartz stressed after the forum. “Anyone who does so should not be moderating presidential debates or forums, and the news networks that enable these failures should not get to broadcast them.”

Men like Lauer are given the opportunity to steer national conversations in a direction that aligns with their personal biases. And for misogynists and abusers, that means creating, enforcing, and enabling power dynamics that unfairly discriminate against women while giving men a relatively cushy perch to crow from.

Laura Olin, a digital strategist who worked with the Clinton campaign’s digital strategy and served as the first member of President Obama’s re-election digital team, blames Lauer directly for giving Trump a pass during the election news cycle.

“It is enraging that these men had so much control over the narrative of the election and were so able to clear the way for a fellow sexual predator,” Olin wrote on Twitter. “How could these men give a female candidate equal treatment when they couldn’t give women equal treatment in their own lives?”

Lauer, and men of his ilk, also influence who else gets to have power and a place at the news table—quite literally.

In 2011, Ann Curry was reportedly made Lauer’s co-anchor on Today as part of a gamble to maintain the show’s ratings if Lauer ended up leaving, according to Brian Stelter’s bombshell book Top of the Morning. Her career ended up being put on the line as a result, because after Curry began her new role, executive producer Jim Bell allegedly hatched a plan called “Operation Bambi” to push her off the show.

“Curry felt that the boys’ club atmosphere behind the scenes at Today undermined her from the start, and she told friends that her final months were a form of professional torture,” Stelter wrote, according to an excerpt published in New York magazine. “The growing indifference of Matt Lauer, her co-host, had hurt the most, but there was also just a general meanness on set.”

Lauer and Curry reportedly did not get along, and NBC and Today seemed to side with Lauer, who they saw as the show’s face and brand. As things deteriorated, Lauer allegedly complained that he couldn’t believe he was “sitting next to this woman.”

Somewhere Ann Curry and ALL the other women who left their jobs and/or the industry because of what "men" like Matt Lauer, Thrush, Rose, Weinstein, Conyers, Trump did to them – and I'm sure we're just beginning to hit the tip of the huge iceberg.

There’s a good reason to believe that Today would always value Lauer’s role in the show over a woman’s. After all, Today was a program largely ran by men. And there was a history behind Lauer’s misbehavior in the workplace, too, which female journalists were well aware of through both whisper networks and public testimonials.

Former co-host Katie Couric, who literally helped build the show’s image up during the ’90s and 2000s, alleged that Lauer “pinches me on the ass a lot” during Watch What Happens Live! in 2012. And before Variety dropped its exposé this afternoon detailing the multiple ways Lauer allegedly harassed multiple employees—from gifting sex toys he hoped to use on one woman to showing another woman his penis—reporter Elizabeth Wagmeister said she’d been working on a story about Lauer’s conduct for months.

At @Variety, @RaminSetoodeh & I had been working on a Matt Lauer story for months and NBC was aware. There are multiple women we've spoken to with far-ranging accusations against Lauer. The power of journalism has never been more evident with this cultural change.

There’s a reason why Lauer didn’t step up for Curry, and it’s the same reason that Couric alleged Lauer sexually harassed her. In Lauer’s workplace, men controlled the world, how it runs, and who gets to star on Today. And until Wednesday, that influence included the way Americans think about the world, too.

Laurer is out of a job for now. The Lauers and Mark Halperins and Charlies Roses will likely continue to plummet fast and hard from their news thrones in this reckoning of abusive men. But their journalist impact on the world still remains—from how people in America view Trump and Clinton to how those views influenced them to cast their votes.

The real test will come with how many of those vacant news seats are filled by women and how many networks are willing to put their money in a shift of power dynamics. For now, it’d be nice just to see how many media companies are willing to make sure another woman isn’t forced into silence or out of a job to protect a system that has failed us so far.