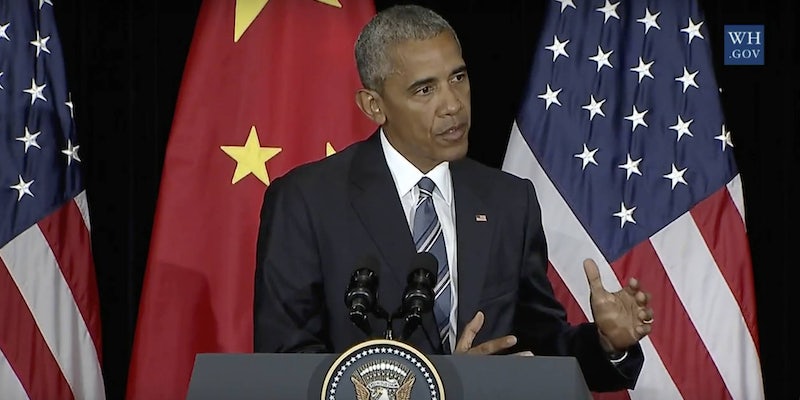 'I think there’s a long history of sports figures doing so.'

Colin Kaepernick’s protest of the national anthem during the NFL preseason has sparked a national debate—one that will likely continue now that Kaepernick made the 49ers’ 53-man team roster—and now even President Obama has weighed in on the protest.

Obama spoke to the press in China, where he attended the Group of 20 summit. And while he answered questions about foreign policy questions and what was discussed during the summit, he was eventually asked about Kaepernick’s protest back in the U.S., which Kaepernick said he would continue doing until “there’s significant change.”

While Obama admits he hasn’t paid much attention to the debate to date, he essentially affirms what some of Kaepernick’s supporters have said the entire time.

“My understanding at least is he’s exercising his constitutional right to make a statement,” Obama continued. “I think there’s a long history of sports figures doing so.” Obama’s response about Kaepernick begins around the 27:29 mark.

“I think there are a lot of ways you can do it,” Obama continued. “As a general matter, when it comes to the flag and the national anthem and the meaning that that holds for our men and women in uniform and those who fought for us, that is a tough thing for them to get past to then hear what his deeper concerns are. But I don’t doubt his sincerity based on what I’ve heard.”

On the heels of other NFL players kneeling and sitting down in solidarity of Kaepernick’s right to protest, Megan Rapinoe kneeled while the national anthem played before a National Women’s Soccer League game, citing solidarity with Kaepernick. She criticized how the media has treated Kaepernick throughout the week and said it’s important to push the conversation forward.

“It was something small that I could do and something that I plan to keep doing in the future and hopefully spark some meaningful conversation around it,” Rapinoe said. “It’s important to have white people stand in support of people of color on this. We don’t need to be the leading voice, of course, but standing in support of them is something that’s really powerful.”