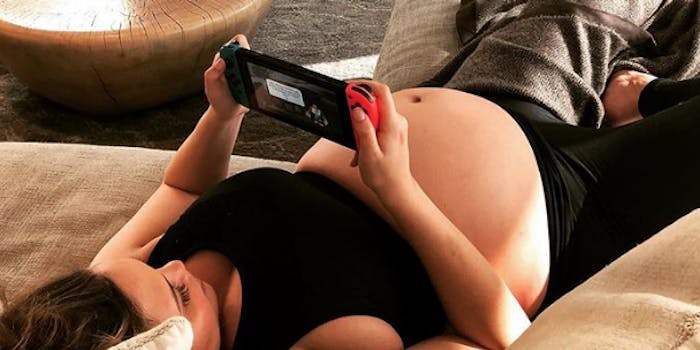 Monday evening’s Met Gala saw tons of celebrities grace the carpet, and prolific Twitter user Chrissy Teigen would like everyone to know that she was among them.

Teigen didn’t actually attend the event, but she did spend the evening enjoying the red carpet reveals on social media like the rest of us. The model and Lip Sync Battle co-host is currently in the third trimester of her second pregnancy (she revealed on Ellen that she’s due in June), which may be why she opted not to fly to New York for the annual fashion event. But nonetheless, from her living room couch watching reruns of Bravo’s Vanderpump Rules, Teigen posted updates throughout the evening as though she was there amongst her peers, having a glamorous evening.

It started with a post of Teigen, bare-bellied, playing her Nintendo Switch, and the caption: “Waiting for my turn on the carpet at the #metgala!!!! Always an honor!!!”

waiting for my turn on the carpet at #metgala!!!! always an honor!!!

From there, she detailed her glam for the big night, explaining that she “shampooed [her] #hair yesterday with #shampoo” and then used a “#towel” to dry it. Take note, fashion-heads.

this year’s #metgala GLAM was #SUPER important to me as I wanted it to really embody the heavenly bodies theme!!! I think we nailed it!! Swipe for for #creds!!! First I shampooed my #hair yesterday with #shampoo then I let it sit for 4 minutes while i #shaved the areas I could see on my #body. Next, I used a #towel to dry my hair from roots to ends!! Then, I used a #rubberband to secure my hair into a pony that i was careful not to pull out all the way! Lastly, I pulled out pieces around my #ears and #neck ! Full tutorial coming up tomorrow !!!!!!!! Like and subscribe!!!!!

The last stop on her glamor tour was her face, where she finally admitted, “I was gonna do a makeup breakdown but I’m honestly just very jealous I’m not there.”

I was gonna do a makeup breakdown but I’m honestly just very jealous I’m not there. Also I need to drink water

Standup Sarah Silverman got in on the action, editing an old red carpet photo of herself to seem a little more on-point for the event’s “Heavenly Bodies: Fashion and the Catholic Imagination” theme.

“So excited to be at the #MetGala right now!!” Silverman joked. “Def not home in dirty shorts & asics doctoring photos of myself.”

Teigen backed her up, saying, “It’s true!!! I am sitting with Sarah and we are not at all at home!!”

Some celebs just live for glamor.