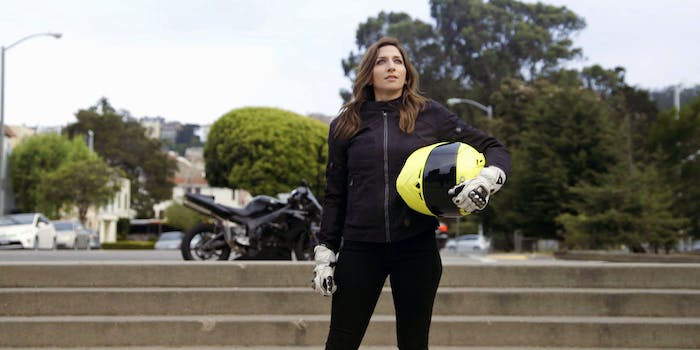 From her meta jokes about Instagram filters to her reinvention of tourism ads on Vine, Peretti has now found a new outlet for her comedy online.

Comedian Chelsea Peretti’s Netflix special, One of the Greats, is filled with plenty of one-off surprises for viewers. From an audience that’s been bored to sleep by her comedy to dogs inexplicably filling the seats of the Palace of Fine Arts in San Francisco, there are truly some bizarre yet hilarious things going on here.

While the random childhood photos of the comedian that antagonize her throughout the performance are strange, the most surprising thing is the absence of Kanye West as Peretti takes the stage for her hourlong special. As a self-proclaimed “direct vessel of God” and a lover of hip-hop, Yeezy’s “I Am A God” seems like it would have been a natural fit for the occasion. Perhaps even for One of the Greats, West’s licensing fees were too steep.

But don’t mistake her ironic hubris for sincerity, for to do so would undermine the true message of her standup, which focuses on matters of the ego and self-esteem. Only minutes into her set, Peretti begins dismantling the overconfidence society can instill in a person as she imagines how gratifying it would be to wake up a man. “My fantasy of what it’s like to be a guy is you just wake up in the morning and your eyes open and you’re like, ‘I’m awesome!’” she belts onstage in her best baritone.

But her jokes aren’t without meaning. In an interview with Splitsider.com in September, she gave some insight behind the thought that went into naming her Netflix release.

I feel like women are frequently seen as guests in the comedy world—you know, a kid sister of the “real comedians.” I like the idea of positioning myself as legendary rather than trying to fit in. Now do I see myself like that every day? No, but I think it’s a funny attitude and maybe on some weird spiritual level maybe it’s a good attitude.

But Peretti doesn’t single out gender in her masterful takedown of confidence, choosing instead to malign all those whom society has deemed as special with her sardonic wit. In a particularly memorable bit, she lampoons the bravery of hot girls who post barefaced photos on social media with the hashtag #nomakeup. “Then the whole Internet is like, ‘Oh good lady, your bravery is unparalleled! We thank you Cassandra!’” Peretti proclaims in her best British accent as she traipses about onstage.

For diehard fans of the comic, the special certainly won’t disappoint. Her trademark “silly billy” antics that harken back to the physical comedy of Variety SHAC videos are on display in spades. Quickly she falls into the various voices and personalities she’s workshopped on Vine and her podcast, Call Chelsea Peretti, shedding each one like an old skin as she moves on to the next punchline. Hopefully, that kind of versatility will convert those only familiar with her because of The Kroll Show or Brooklyn Nine-Nine into allegiant fans.

To label One of the Greats as merely another standup special seems like an injustice, given the amount of original material and thought that went into the performance. While the scripted audience interruptions and prerecorded clips certainly tip their hat to predecessors like Sarah Silverman’s Jesus Is Magic, the voice is singularly Peretti’s. Though she had her own half-hour in 2011 thanks to Comedy Central Presents, Netflix appears to have offered Chelsea the creative freedom needed to craft the purest expression of her comedy. A clever viewer might even take the opening credits as a slight to networks who have stifled her prior work.

The fact that Peretti has rebuked the traditional channels of release for her standup special seems all the more appropriate, given that her comedy has come to be so intertwined with technology. From her meta jokes about Instagram filters to her reinvention of tourism ads on Vine, Peretti has now found a new outlet for her comedy online.