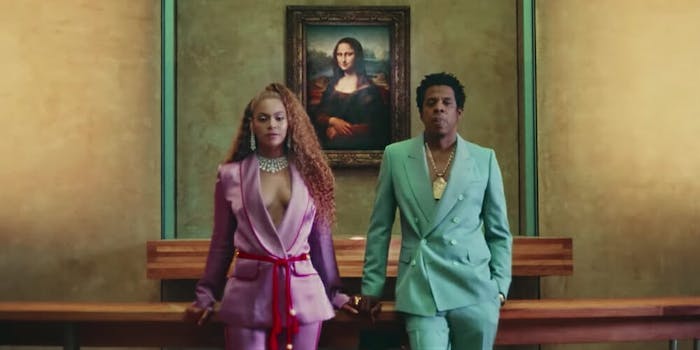 It seems to be a private family photo from inside the Carter's home.

Someone shook the Beyhive with leak of an unreleased image of Beyoncé and Jay-Z’s kids on social media Wednesday.

According to BuzzFeed News, the leak is a black-and-white photo showing Carter kids Blue Ivy, Sir, and Rumi. It’s uncertain how the photo ended up on social media, but it seems to be a private family photo from inside the Carter’s home as it’s framed on a wall.

Entertainment media company Hollywood Unlocked, reposted the image on Wednesday via Instagram. The company tagged another media company, Freeish Media, in the caption, citing it as the source.

“#HUBabyFever Aww #Beyoncé and Jay-Z’s kids, #BlueIvy, #SirCarter and #RumiCarter posted up together. via: freeishmedia” Hollywood Unlocked wrote in the caption of the now-deleted image.

Hollywood Unlocked told BuzzFeed News that a representative for Beyoncé asked that the image be taken down.

“We received a photo of Beyoncé’s children via an anonymous source and posted the image believing that it had already been posted by the Carters,” the Hollywood Unlocked statement read.”After receiving a call from Beyoncé’s representative and learning that the image was not authorized we immediately removed it from our platform out of respect for their privacy.”

The Beyhive isn’t too happy about the clear invasion of privacy.

“Y‘all leaking & spreading the pic of Blue Ivy and the twins is just disgusting. I‘m sure if Beyoncé wanted to share this with us she would‘ve via her Insta/Website. If you retweeted/ tweeted the picture please unrt/delete the tweet,” Twitter user @likeproperty wrote.

Many other tweets voiced similar concerns.

The one who leaked Beyoncé babies thought we'd be happy about them but we're bitter. Very bitter about it. 🍋 🐝 🍋 🐝 🍋 🐝

The fact that somebody leaked that picture of those kids pisses me OFF. Y’all DRAGGED blue ivy as a baby. Why would she post the twins. Let ppl be private. I hate y’all! 🤦🏽‍♂️

Who leaked that pic of Beyoncé’s kids? pic.twitter.com/8I6OraNWuW

beyoncé is so done with us y’all…we had a good run! pic.twitter.com/V3mRaTAI4Y

The Carters are notoriously private people, and Beyoncé’s management team is known for scrubbing the internet of any and all unauthorized Beyoncé-content.

There is a lot of buzz within the Beyhive this week. Beyoncé is also reportedly coming out with new music and a Netflix documentary all about her legendary 2018 Coachella performance, according to US Weekly.

The Daily Dot has reached out to Hollywood Unlocked and Freeish Media for comment.