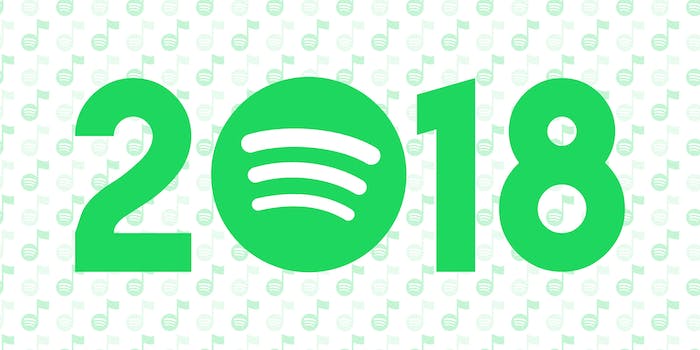 The best songs of 2018: A long Spotify playlist

For the seventh time, the Daily Dot’s music stans have made you a 24-hour, 360-song playlist of the year’s best music. Listen to it below.

It’s not just a dump of songs—it’s a mixtape. You can listen to it A-Z and never hear the same artist twice. (Except for, you know, Drake and then a song by another rapper featuring Drake.) In a year where teens found new music by searching for “sad music” on SoundCloud, and mainstream rock finally became unlistenable, and major labels planned release strategies around social media spats, and “Spotify” became a genre defined by soft vibes that lull you into not turning off the stream, there was an unquantifiable lot of great music. (Just read Bandcamp’s wonderful year-end list of indies—one I looked to for some of these playlist selections.)

This thing took nine people to construct. I had to go through and cut the duplicates, so by virtue of the fact that these people appeared in every mix-maker’s batch, these are the Daily Dot’s favorite musicians of the year:

The 2018 Long Player, a Daily Dot tradition since 2012, is here to power our lonely holiday season.

The best songs of 2018: A long Spotify playlist