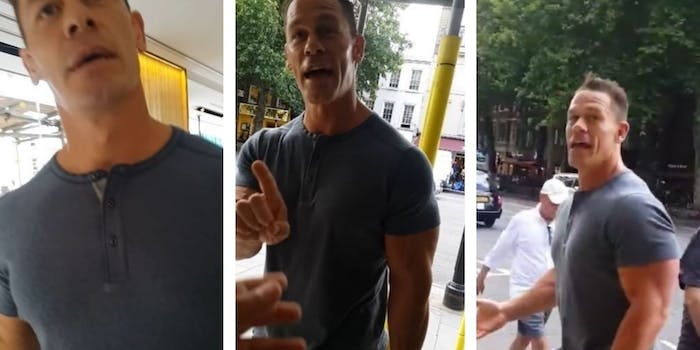 ‘You’re going to use all of this without my permission. You didn’t ask to shoot. You’re still filming.'

John Cena is one of the most charitable athletes in pro wrestling history—and probably the most memeable. But a small British YouTuber managed to upset him by refusing to stop filming him, and he got it all on video.

On Tuesday, Mo Deen, who has about 1,800 subscribers, uploaded a vlog in which he’s seen continuously badgering Cena in a London shop.

Cena is known for his strength and his affability—and for fulfilling about twice as many Make-A-Wish requests as anybody else ever. But his restraint in this video is impressive. First, he ignores Deen. Then he confirms that he is, in fact, John Cena from the WWE before sarcastically thanking Deen for asking permission to film him.

But that didn’t stop Deen—who called himself the “realist” and only talked trash about Cena when he was a safe distance away—from continuing to record Cena. As Cena was leaving the store, Deen asked if he had any advice. “Yes,” Cena said, “be respectful. That’s my advice for you. Ask if you can take a video. But you’re just shooting video. I don’t want to talk to you.”

“It doesn’t matter who are you,” Cena retorted. “You don’t treat anyone with respect. … I don’t care who you are. I don’t care what you do. Thank you very much for being respectful.”

As Cena was set to walk away, he continued, “I need you please to ask. You’re going to use all of this without my permission. You didn’t ask to shoot. You’re still filming. Be respectful.

The title of Deen’s first video is pure clickbait. It says “John Cena flips out on Mo Deen WWE Raw.” Except Cena didn’t flip out on anybody. He was calm and displayed pure class at what he clearly considered a continued invasion of his privacy.

Then, Deen said he couldn’t figure out why Cena had such a problem with him.

Unsurprisingly, the harassing video didn’t go over well with those who watched it on YouTube. His two videos combined for 160 likes and about 3,700 dislikes, and here are a sampling of some of the comments.

“You really should have been punched in the face. Seriously.”

“Saw this on r/cringe and BOY is it cringe. If you had any self-awareness whatsoever, you’d be a real comedic character.”

“Cringeworthy. John has some major patience, I woulda slapped the spit outta mouth.”

“Respect is reciprocal. You get what you give,” he wrote.

Respect is reciprocal. You get what you give.