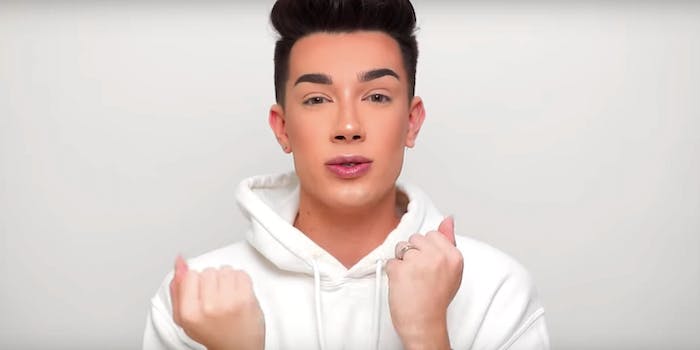 'I know so much about it, I might as well use it for something.'

AP scores are starting to be released, and students around the nation will figure out if they passed the notorious exams. Most students are nervous to find out the results—especially those who wrote their essays about the James Charles and Tati Westbrook scandal from this past May.

But the College Board should not be surprised to find Twitter and YouTube vlogger beef being written about in their essays. In the world of the internet, two beauty moguls going against each other is the equivalent of a Kamala Harris/Joe Biden takedown at a presidential debate—minus, of course, the weight of an entire country on their backs.

me talking about the james charles and tati westbrook scandal in my ap lang argumentative essay #aplang pic.twitter.com/aduw3hIvMy

The essay prompt on the AP Language exam called for students to write about something they felt was “overrated.” And though discussing the prompt is prohibiting per College Board rules, those rules seemingly do not apply on Twitter.

“I can’t believe I just wrote about the Tati and James Charles scandal for my argumentative AP Lang test,” said Twitter user @AlondrGutierrez.

I can’t believe I just wrote about the Tati and James Charles scandal for my argumentative AP Lang test. #overrated

“You have to tell us now though, what did you get? because if you didn’t get a 5, collegeboard doesn’t know how to recognize quality content tbh,” responded user @emmyxmariex.

you have to tell us now though, what did you get? because if you didn't get a 5, collegeboard doesn't know how to recognize quality content tbh

“The AP graders all learning about the James Charles drama from all our argument essays,” tweeted @AWanderingGhost

The AP graders all learning about the James Charles drama from all our argument essays #APlang #aplangexam pic.twitter.com/Qx6E3ZDhC0

“Me walking into the ap lang exam tomorrow ready to write about the james charles/tati scandal as an example in my argument essay,” tweeted @frenchornfatale.

Making memes about the AP tests is not a new trend. AP test memes have been popping up over the last few years. As Mel Magazine calls it, “After AP test season, it’s AP meme season.” Many students post memes about the exams, creating a communal experience with other high schoolers around the nation.

But writing about pop culture showdowns and then making memes about it is the future of college test taking, whether the College Board likes it or not.

In May, Pedestrian.TV interviewed high schoolers who wrote about the controversy, many of whom said they wrote about it because it is a detailed relevant topic that most of them already knew about.

“The James Charles scandal is such a big deal right now and everyone knows so much about it that it just seemed like one of those topics that would be easy to write in detail about,” said a student named Maya. “I know so much about it, I might as well use it for something lmao.”

Another student told the outlet, “[James Charles] has gotten so many new people interested in him because of this scandal and although he is losing followers, he’s getting more people noticing him than he is actually worthy of because his scandal of being a predator and doing undesirable things, he’s not really worth all this turmoil and attention, so therefore is overrated.”

The ability to turn internet beef into a thought-out argumentative essay on a college exam is peak Gen-Z.

They all deserve 5s.