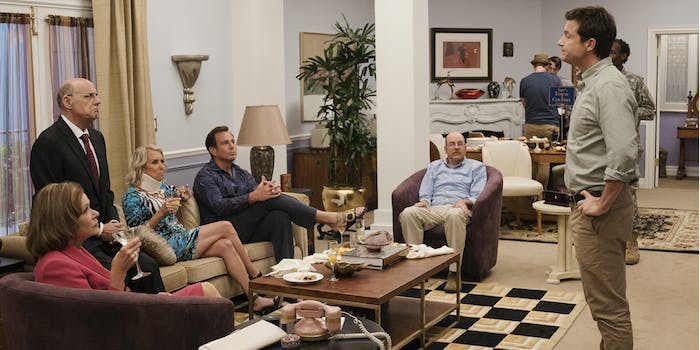 On Wednesday, the New York Times ran a Q&A with the cast of Arrested Development, and a good part of the interview focuses on harassment allegations against Jeffrey Tambor (George Bluth Sr.), which got him fired from Transparent earlier this year. In the course of the discussion, Jessica Walter (Lucille Bluth) reveals that she was also harassed by Tambor on set.

But that revelation happens in between Jason Bateman (Michael Bluth) doing some verbal acrobatics to explain Tambor’s behavior (he’s just “difficult”), fluff his ego (he would never do the show without Tambor), and mansplain the entertainment industry to Walter, a veteran stage and screen actor. Walter eventually tears up while telling Tambor she has to “let go of being angry at him.”

“Verbally, yes, he harassed me,” she says, “but he did apologize. I have to let it go.” Alia Shawkat (Maeby Fünke) tries to divert Bateman’s “Well, actually”-ing, saying that “things are changing and people have to respect each other differently,” but the rest of the cast members (Tony Hale, David Cross, Will Arnett) either make jokes or defend Tambor, or both.

It is an incredibly uncomfortable interview, but it also perfectly illustrates certain patterns, in the entertainment industry and beyond: How women are talked over, gaslit to feel responsible for a man’s actions, pressured into forgiving a man so he can “grow” and “learn.” That sense of resignation women know all too well. Walter is clearly talking about abuse that has stayed with her for years; she reiterates that the abuse was bad, the worst she’s experienced in 60 years in the industry. This is an important revelation that could have led to discussion. The men in the room try to downplay it.

Bateman has now started his apology tour, but of course, it rings hollow because it took him getting called out by the internet to realize how awful he was being, something he cites right away. “This is a big learning moment for me,” he says.

– horrified that I wasn’t more aware of how this incident affected her.
I was so eager to let Jeffrey know that he was supported in his attempt to learn, grow and apologize that I completely underestimated the feelings of the victim, another person I deeply love – and she was..

… sitting right there!
I’m incredibly embarrassed and deeply sorry to have done that to Jessica. This is a big learning moment for me.
I shouldn’t have tried so hard to mansplain, or fix a fight, or make everything okay.
I should’ve focused more on what the most important…

…part of it all is – there’s never any excuse for abuse, in any form, from any gender. And, the victim’s voice needs to be heard and respected.
Period.

I didn’t say that and instead said a bunch of other stuff and not very well.
I deeply, and sincerely, apologize.

Hale has also tweeted out an apology, claiming he reached out to Walter “personally.”

I have reached out to Jessica personally to apologize. Arrested Development is one of my families. Regardless of my intentions, it is clear that my words, both said and unsaid, served to minimize Jessica’s pain and for that I am extremely sorry.

Arrested Development has often focused on men’s empty displays, their ineptitude—though for laughs. Empty apologies could also fit on a show about a terribly flawed, narcissistic, and self-absorbed Bush-era family. Its humor resonated with audiences across four seasons and became part of internet meme language. But, as we discussed on the Upstream podcast last week, a lot of the jokes from earlier seasons don’t hold up now. One of the biggest gags from earlier seasons is that Michael Bluth doesn’t care enough about his son’s girlfriend, Ann, to even learn her name. (The joke is that she’s also not attractive enough to care about.) The show also has some iffy thoughts about homosexuality and race.

Season 5, which debuts on May 29, is returning after a five-year absence, post-Trump and last fall’s predator purge, of which Tambor was part. In the first few episodes made available for review, Gob and George Sr. go on a road trip to Mexico to get laid and get their “heterosexual vigor” back. There are also callbacks to Tambor’s role on Transparent that feel a bit too winking.

Bateman’s apology feels like it was ripped from Arrested Development; perhaps after close to 15 years, the show’s title has developed a double meaning.