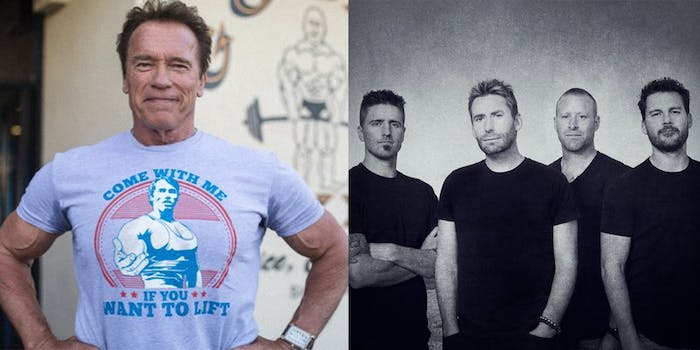 Nickelback won this round.

There’s no faster way to shit all over something than by comparing it to Nickelback. The band’s reputation has become internet shorthand for the worst thing imaginable. Canadian police have threatened drunk drivers with having to listen to Nickelback, while authorities in Australia want the band for “crimes against music.” Even Mark Zuckerberg dropped a random diss to the Canadian alt-rock group in his recent home video.

Frankly, the whole thing has gotten a little tired and lazy, and Nickelback is tired of being the internet’s punching bag—especially when it’s Arnold Schwarzenegger throwing the punches.

Last night, The New Celebrity Apprentice host took to Twitter to raise awareness about gerrymandering, and used Nickelback as a reference point for unpopularity.

When Congress is less popular than herpes & Nickelback, how do 97% of them get re-elected? Gerrymandering. WATCH: https://t.co/SoX0tdlTeM

But Nickelback clapped back. Hard.

The band’s referring, of course, to Schwarzenegger’s role as Mr. Freeze in 1997’s Batman & Robin, a film that tanked with critics and at the box office (though it did deliver some incredibly memorable puns).

Sensing defeat, Schwarzenegger took the high road out of town.

That's… ice cold. I hope we can agree that we need a freeze on gerrymandering, guys. Thanks for the reply.

For his part, Schwarzenegger has continued on his crusade against gerrymandering:

Here's the good news. We can fix it. After California's redistricting reform, 14 of our 53 members of Congress lost or chose not to run.

Neither party wants independent redistricting, because they don't want to give up their power to rig the system. We have to fight for it.

We have the blueprint to win redistricting reform so that congresspeople actually have to compete for their jobs. https://t.co/SoX0tdlTeM

But he learned a valuable lesson: Nickelback is tired of it.