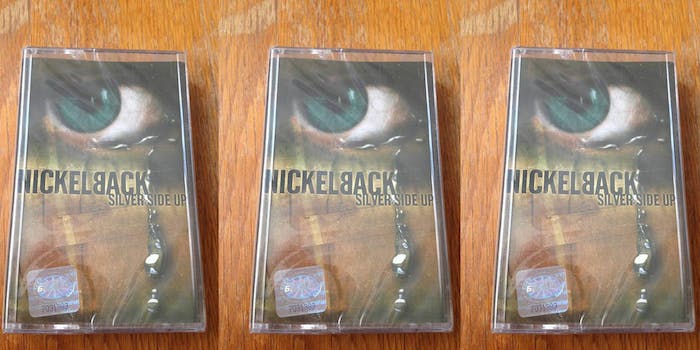 This is how you remind me not to drink and drive.

Police in Kensington, Prince Edward Island, are taking the town’s “Enjoy our hospitality!” motto to a whole new level. In an effort to thwart drunk driving, the Kensington Police Service says it’s threatening to play Nickelback’s breakthrough album Silver Side Up.

The Canadian police department posted a Facebook status on Saturday with the comical consequences to drinking and driving.

“Know that the Kensington Police Service will be out for the remainder of year looking for those dumb enough to feel they can drink and drive,” the post reads in part:

“And when we catch you, and we will catch you, on top of a hefty fine, a criminal charge and a years driving suspension we will also provide you with a bonus gift of playing the offices copy of Nickelback in the cruiser on the way to jail. Now, now, no need to thank us, we figure if you are foolish enough to get behind the wheel after drinking then a little Chad Kroeger and the boys is the perfect gift for you.”

According to CBC News, the photo used was found via Google Image search. The Kensington cops don’t actually have a copy of Silver Side Up, but that doesn’t mean they won’t slam that aux cable into their phones and look the songs up on YouTube or Spotify.

“I would have no problems at all getting hold of a copy of Nickelback and making that the musical play-along on the way in to chat with someone who’s been caught for drinking and driving,” Const. Robb Hartlen told CBC News.

As of this writing, Nickelback has yet to respond to its music being used as a drunk driving deterrent.