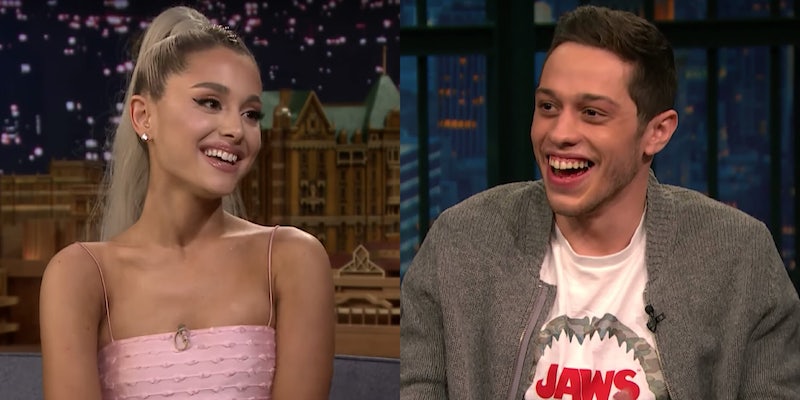 Update June 21, 7:14am CT: Pete Davidson confirmed on The Tonight Show with Jimmy Fallon on Wednesday that he was engaged to Ariana Grande.

Tonight Pete Davidson confirms his engagement to Ariana Grande. Here's a sneak peek. Tune in to #FallonTonight for the full interview. pic.twitter.com/NjxmZ2njgR

“Now, you know you didn’t have to get engaged to Ariana Grande to come on our show, right?” Fallon joked.
Davidson shot right back: “But I did, though … I feel like I won a contest.”

Ariana Grande and Saturday Night Live star Pete Davidson are engaged after just “several weeks” of being in a relationship, People reported on Monday. A source told People that it’s a “recent engagement.”

“They’re just two people who found love quickly and make each other happy all the time,” the source said. “They both started talking about it this past weekend. It’s nothing they’ve been hiding.”

Over the past month, Grande and Davidson have been publicly flirty on social media and sported matching robes on a romantic getaway to the Wizarding World of Harry Potter. But even for a celebrity couple, an engagement seems hasty.

whoever is controlling the ariana grande and pete davidson sims just queued up get to know, chat, get to know, flirt, hug, ask if single, give rose, first kiss, get to know, tell joke, make out, get to know, ask to move in, kiss, woo hoo, propose, and put the game on fast forward

On Twitter, fans were celebratory, shocked, and even confused about the news.

I’m literally so happy like…. I never thought I would see this day come omfg. congratulations @ArianaGrande we love you smmmm <3

Grande, 24, reportedly broke up with rapper Mac Miller in May, ending what she called a “toxic relationship” that lasted two years. Following the breakup, Miller was charged with a DUI after crashing his car, and Grande called out a Twitter user who blamed her for the incident.

“I am not a babysitter or a mother and no woman should feel that they need to be,” Grande wrote on Twitter at the time. “I have cared for him and tried to support his sobriety & prayed for his balance for years (and always will of course) but shaming / blaming women for a man’s inability to keep his shit together is a very major problem.”

As of the time of writing, neither Grande nor Davidson have confirmed (or denied) that they’re engaged. But shortly after the news broke, Grande tweeted “i love u” followed by monkey emojis.

Here’s to hoping the two enjoy long, happy lives—together or not.

I'll believe it when I see a ring! #ArianaGrande pic.twitter.com/v9h3xBxCK2