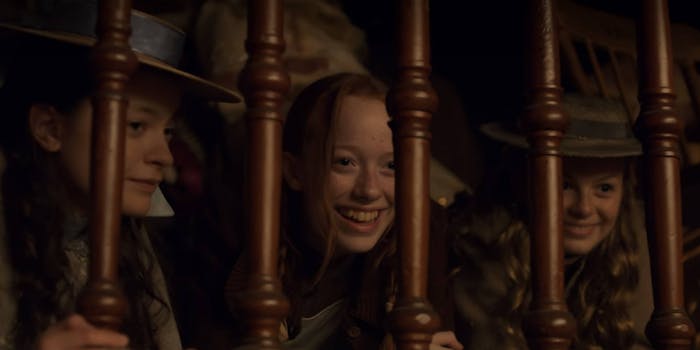 The streaming giant canceled 'Anne With an E,' and Anne Nation responded.

Netflix announced on Monday that Anne With an E, the CBC’s adaptation of Anne of Green Gables, would see its final season in January.

Creator Moira Walley-Beckett confirmed the cancelation, but didn’t say whether the series might live on elsewhere. Netflix and the CBC said in a statement:

We’ve been thrilled to bring the quintessentially Canadian story of Anne With an E to viewers around the world. We’re thankful to producers Moira Walley-Beckett and Miranda de Pencier and to the talented cast and crew for their incredible work in sharing Anne’s story with a new generation. We hope fans of the show love this final season as much as we do, and that it brings a satisfying conclusion to Anne’s journey.

Still, the comments on Walley-Beckett’s post confirmed that it had a devoted fanbase. As with so many other canceled Netflix favorites—Sense8, One Day at a Time, The OA, Tuca & Bertie—fans responded on Instagram and Twitter asking Netflix and the CBC to renew and/or save Anne With an E. Via a series of slightly confusing hashtags, fans shared their favorite moments, lobbied for a season 4, and stressed why the show was important to them.

a show with a woman protagonist, a woman as a producer and a all woman writting team getting cancelled before even air? we get your message @netflix @cbc stories told by woman dont matter.#SaveAnneWithAnnE #renewannewithane pic.twitter.com/m4zUnAR7rJ

*Everyone saying goodbye to Awae*
The whole Anne with an e nation:#SaveAnneWithAnnE pic.twitter.com/C47n6BG7eG

The third and final season of Anne With an E airs Jan. 3 on Netflix.