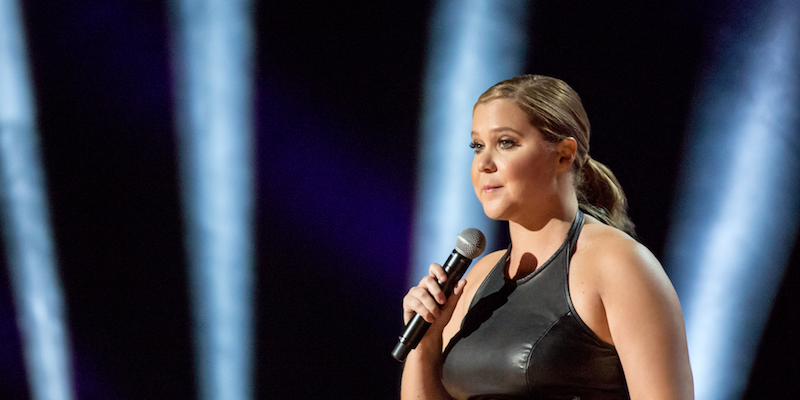 She's a household name now. But don't expect Schumer to tone it down.

Amy Schumer’s last standup special was 2015’s Live From the Apollo. In the two years since, Schumer has been accused of joke theft, booed by apparent President Trump supporters, become a Hollywood name after starring in Trainwreck, and stumped for gun control.

So there’s a natural curiosity about what exactly Schumer would tackle in her first Netflix special, which hits the streaming giant on Tuesday. In The Leather Special—filmed in Denver before the election—Schumer addresses one issue right away: What she’s wearing. She looks uncomfortable and touches on how women often have to suffer for their art, but it’s also a middle finger to the idea that a woman’s body is malleable. As she says later in the special: “I am what Hollywood calls very fat.”

As in her 2015 special, body image is a focal point. She talks about tweeting a photo of herself in her underwear, and the subtext of the viral response: She’s so brave, which is not the response she wanted. Schumer also doubles down on the content that made her a household name. Her “pussy smells like a small barnyard animal” on its best day, she comments. On its worst day, it apparently smells “homeless,” and also like ISIS, but that’s “the nature of a pussy.” She gets a little brand synergy in there by comparing her vagina to the Upside Down in Stranger Things.

She talks about her vagina at length, and must be aware it’s become a parody. Last season on South Park, Cartman tried to butter up Wendy with a speech about how women are funny, get over it: “Talk about how fat you are and how you want to have sex with guys and say ‘my vagina’ a lot.” Some surmised it was directed at Schumer, but it could also be a comment on how men discount “women’s comedy stuff,” as Cartman says. As Schumer pointed out in Live at the Apollo, a label’s been put on her because she’s a woman talking about sex.

There’s an amusing bit about how underwhelming men’s ejaculate is, and a vivid mental picture of a guy holding the world’s saddest ice cream cone. This is all well-tread Schumer territory, but one segment might have benefited from a little more insight.

In 2015, two women were killed and nine injured after John Russell Houser—who had a history of mental illness and domestic abuse—opened fire at a Lafayette, Louisiana, screening of Trainwreck. Schumer became a high-profile advocate for gun control and parodied gun access on Inside Amy Schumer, but her bit about how “gun nuts” respond to gun control arguments leans a bit too much on stereotypes (they live in trailers, talk in exaggerated Southern accents). She points out the double standards of gun purchasing in the U.S., that we’re a country where a blind person and someone on the terrorist watch list can buy a gun, but doesn’t go much deeper.

She also comments on her new fame, which she brings up at the beginning of the set. Schumer’s a “shitty famous person” and goes to the tape for proof: There’s her and her sister in unglamorous paparazzi photos. An extended bit about Bradley Cooper goes on too long, and quietly cancels out Schumer’s “but I’m an outsider” argument. She’s hanging with Mr. Cooper now.

It’s not a cohesive show; Schumer throws out some one-liners that don’t really go anywhere (“I’m a German Jew; there used to be more of us”), and at times it feels like there’s no connective tissue. She comes closest in the segment about gun control, when she answers critics who think she should stay out of politics: “You can catch a hot load all over your titties and still not want your loved ones to get shot in a theater.”