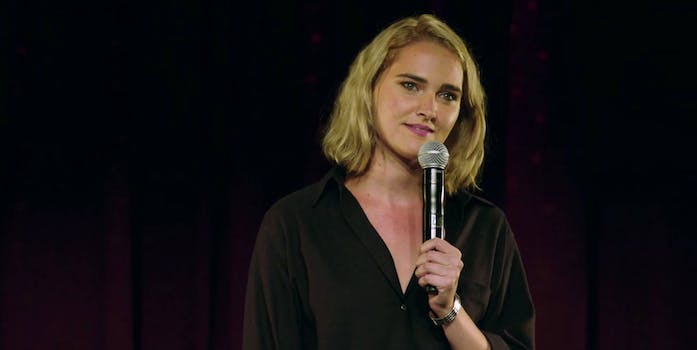 Jena Friedman explores the divide between b***h and c**t

The word “cunt” has really gotten around this year, thanks to the blinding sexism that continues to trickle out of the 2016 election—and the existence of Hillary Clinton. In her new Seeso special, Jena Friedman says she’s not trying to reclaim the word, but rather open up its definition.

American Cunt, which debuted at the Edinburgh Fringe last year, is the former Daily Show producer’s first standup special. She told the Daily Dot last summer that her comedy “is not for late night and it’s always done better abroad. It hasn’t done well in mainstream America.”

The special—which kicks off Seeso’s 12-week standup streaming fest—reflects that assessment. It’s heavy on the female experience and at times it feels like Friedman is just addressing the women in the room. On the different “flavors” of feminism now: “I love male feminists,” she says. “I just wish you could support us without having to take credit for it.”

A bit about still fitting into her “9/11 jeans” leads into observations on aging and double standards: “I think the best way to age gracefully is to have been born a man,” she states, before moving into a medium-rare bit about Caitlyn Jenner.

Friedman fares better with political humor, especially jokes about abortion and the war on women’s rights: “The best thing about abortion jokes is nobody tries to steal them.” During Wednesday night’s third presidential debate, Donald Trump demonstrated his total lack of knowledge regarding how abortion actually works, proving once again just how out of touch men are about women’s bodies. (This special was taped before the leak of Trump’s hot-mic moment.)

She goes deeper on the terms applied to women, joking that bitch is worse than cunt because if you call a woman a bitch, she’s probably really a bitch. Talking about Clinton’s likability, Friedman fields comments from the audience about why Americans don’t like her, without shouting it’s because she’s a woman. She also addresses that because we thought of Trump was a joke for so long, he’s already won: “He’s exposed a vulnerability in our nation that we haven’t seen since 9/11.”

Amy Schumer recently saw a walkout at her Tampa, Florida, show, after she dug into material about Trump’s misogyny, sexual assault, and gun control. Many fans thought she’d gotten “too political.” Friedman isn’t on the same level of visibility as Schumer, but she addresses the same issues. As women with a platform, why shouldn’t they?