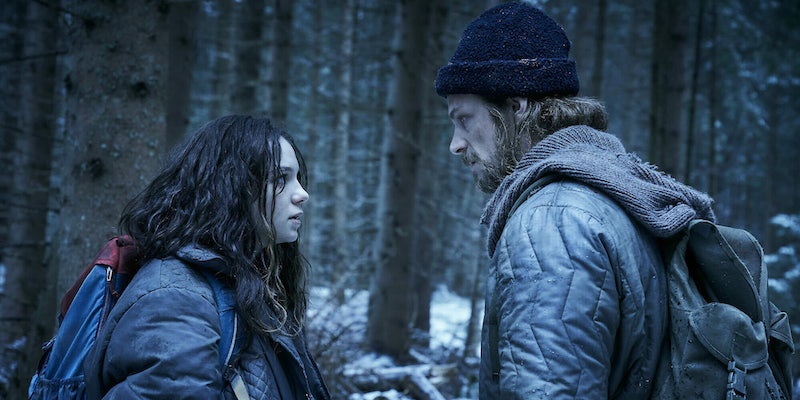 Developed by the film’s co-writer David Farr, Hanna‘s first two episodes are practically a scene-for-scene remake. Esme Creed-Miles stars as Hanna, a teenage girl raised in a secluded European forest by her father Erik (Joel Kinnaman), who teaches her survival skills, martial arts, and fluency in multiple languages. He’s preparing her for persecution by “bad people,” led by CIA agent Marissa Wiegler (Mireille Enos), and he’s right to be afraid.

When Hanna finally makes contact with the outside world, she attracts the attention of American agents who clearly have no interest in her wellbeing. So begins a series-long game of cat and mouse, with Hanna trying to escape Wiegler’s clutches and find out more about her past. Why do so many people want to catch her, and why was Erik determined to give her this bizarre childhood?

Pop culture loves the trope of young, innocent women with dangerous abilities, especially when they’re being controlled by overbearing father figures. These stories often veer into sexist, arguably fetishistic territory, but that’s not the case with Hanna. Both versions put real thought into how Hanna’s sheltered childhood would shape her personality, resulting in a teenager with no instinct for social interaction or beauty standards. Creed-Miles gives Hanna an animalistic stillness, surveying people through a curtain of lank brown hair. Raised to hunt and fight, she knows how to survive but not how to live.

The show moves into new material by episode 3, making things less predictable for fans of the movie. Wiegler and her associate aren’t as menacing as Cate Blanchett and Tom Hollander were in the film, which cuts down on the tension, but on the other hand, Hanna’s induction into the real world gets more screen time. After befriending a British teen named Sophie (Rhianne Barreto), she begins to realize how weird her life has been.

Sophie is a brat with all the frivolity and mood swings that Hanna lacks. The details of her teen rebellion are virtually incomprehensible to Hanna, but the general sentiment is not. Hanna’s own father wants her to follow his orders and advice without question, but he’s never told Hanna the whole truth about her past. If she can’t trust him with something so basic, why should she trust him at all? She knows there’s something odd about her, but she can’t tell if it’s nature or nurture. When someone describes her as unique, she replies, “Unique just means alone.”

Like Netflix’s The Innocents, Hanna strikes a good balance between action and sensitive teen drama. It’s not as idiosyncratic or stylish as the original movie, but it works on its own as an espionage thriller. Kinnaman and Creed-Miles are especially good in the two lead roles, a welcome reprieve from Kinnaman’s contrived performance in Altered Carbon. He’s back with more semi-naked fight scenes (apparently his new signature move), but this time his million-hours-in-the-gym physique makes more sense for his character, a former soldier who just spent 15 years eating fresh meat and chopping wood. Erik is dangerous and a little sad, with an inexpressiveness that’s reflected in Hanna’s preternatural calm.

Hanna may not be too exciting for diehard fans of the movie, which benefitted from its aesthetic flair and offbeat humor. It doesn’t help that the TV version of Marissa Wiegler just isn’t as compelling as Blanchett’s glamorous fairytale villain. But if you’re looking for a mainstream action thriller with a compelling emotional core, you’ve come to the right place.