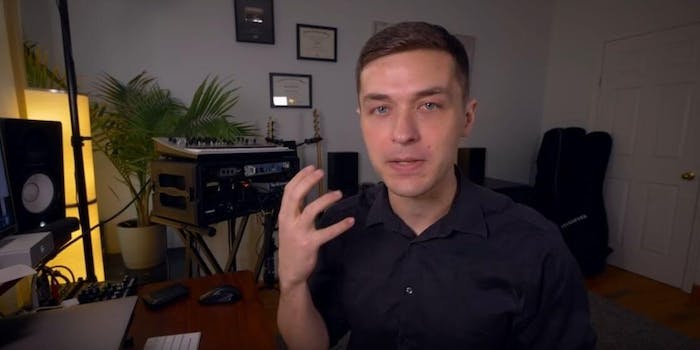 In a video that went viral last year, YouTuber Adam Neely defended Katy Perry and her publisher Warner Chappell Music as they were in the midst of a lawsuit for allegedly plagiarizing another musician’s song. On Thursday, Neely said Warner Chappell, despite the fact he defended the publishing giant, copyright claimed one of his videos, effectively taking for itself all of the advertising revenue he could earn from the video.

The matter has been settled now, Neely told the Daily Dot on Friday. But still, the story was maddening for the YouTuber.

When rapper Flame sued Perry and Warner Chappell for copyright infringement for one of his old songs, Neely uploaded a video last year titled “Why the Katy Perry/Flame lawsuit makes no sense,” a vlog that drew nearly 3 million views. In it, Neely said that Flame had no case against the singer and Warner Chappell.

Flame won his lawsuit last July, as the jury said his 2008 song “Joyful Noise” had been copied by Perry for her 2013 tune “Dark Horse.” A jury ordered that Perry pay more than $2.7 million for the plagiarism, but she’s since appealed that verdict.

Neely, though, didn’t agree with the jury’s decision.

“In my [original] video, I explained why I felt the lawsuit was absolute garbage …” Neely said in a video he released on Thursday. “Because the melody is so simple and short, you can find similarities between any number of different songs though hundreds of years of music. In other words, the composition that was being sued over was so minor and so similar to other pieces of music, the lawsuit made absolutely no sense. …

“I gave a lot of support defending Katy Perry … and defending the publisher for the right to publish the song ‘Dark Horse.’ I did this because I truly believed the lawsuit was bad for musicians, bad for creativity, and bad for the art form of music-making.”

On Friday morning, though, Neely told the Daily Dot that he had appealed the copyright claim and that it had been quickly released, meaning Neely, once again, can profit from his own content.

“I deal with these claims daily, and they’re mostly all released eventually, but this one, in particular, was so funny, so ironic, and so meta that I had to make a video about it,” Neely told the Daily Dot. “Especially since I was in touch with people working for the publisher’s legal team working on music copyright cases because of the original video that got claimed. The layers are absurd.”

Here’s this week’s video on the subject.

Warner Chappell did not immediately respond to a Daily Dot request for comment.

Luckily for Neely, nobody else will have to stop in on his behalf to make sure he gets his money.