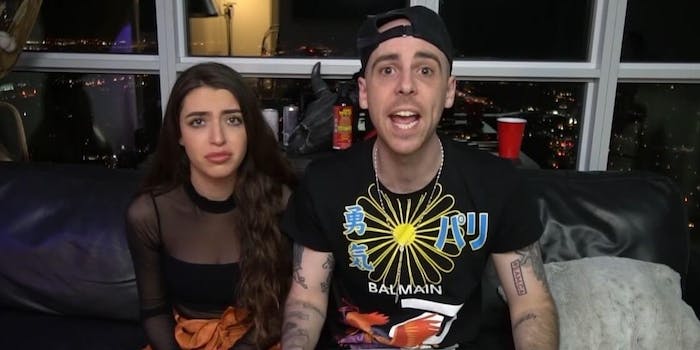 He's clearly worried about his future.

YouTuber ImJayStation, who courted controversy in recent YouTube videos where he claimed girlfriend died but then later admitted it was a hoax, was arrested Monday by Toronto police after he was accused of assaulting his still-living significant other.

According to Newsweek, police issued an arrest warrant for ImJayStation, whose real name is Jason Ethier, on Monday and took him into custody after his girlfriend Alexia Marano accused him of physical abuse. He has been charged with two counts of assault. Ethier was later released, and he said on Instagram, “Guys, I just got arrested. But I’m back home and back on the grind. That’s why I missed the upload. New video dropping tonight. I’m going harder than ever now. Love you guys.”

He is now scheduled to appear in court in mid-March.

In a video released Tuesday, Ethier talked about the recent publicity he’s received from YouTube gossip host Keemstar. Keemstar accused Ethier of profiting from people’s deaths, including those of rapper Mac Miller and YouTuber Etika, with paranormal videos. But Ethier Keemstar has always spread lies about others and that he’s more relevant than Keemstar. He also challenged Keemstar to a boxing match.

The 29-year-old Ethier, who has more than 5.4 million subscribers, did not mention his arrest or Alexia in his latest video.

But in a previous video, after he admitted that Alexia was still alive, he said he was worried about his future.

“I never hit a woman in my life,” he said. “How could my girlfriend go and does this to me? How did I deserve this? … Now my entire life is ruined.”

Last month, Ethier riled up much of the YouTube community with a series of videos that discussed the apparent death of Alexia. In a video titled “My Girlfriend Alexia Died… *Rest In Paradise*” he said through tears that she had been killed by a drunk driver.  In the days following, he visited her fake roadside memorial and conducted a Ouija board challenge to try to “contact” her.

He was quite clearly trying to build subscribers to their jointly-operated Dream Team YouTube channel. But later he admitted that “Alexia was never dead at all.”

Instead, he said she left him while he was sleeping because her parents for were upset about the death hoax.

“She was down to make these videos with me,” Ethier said. “She was nervous, but I told her it didn’t matter. These people are going to talk but they’re going to talk regardless. She was OK and agreed to do it.”

But in her own video late last month, Alexia said Ethier had been abusive and that she went to the police and charged him with domestic assault. She said he assaulted her on two separate occasions and she said, “One time, he literally threw and whipped an iPhone at my head, and one time, he grabbed me off the couch and threw me to the ground.”

Ethier has not responded to the Daily Dot’s multiple requests for comment.