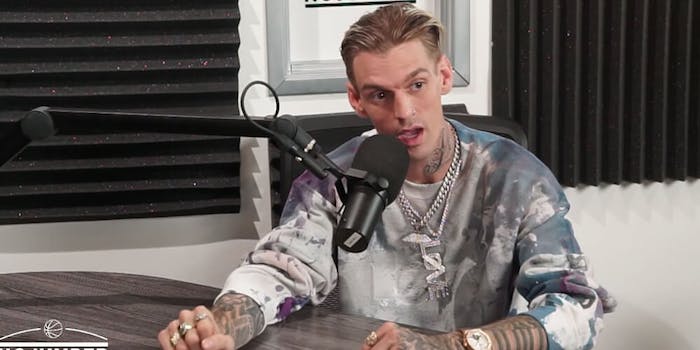 Carter called the artist a 'd*ck' and said he should have 'taken it as a compliment.'

Aaron Carter is catching flack online after publicly berating an artist who accused the singer of using his work to promote his clothing line without permission or credit.

On Friday, Carter tweeted out a link to his website, noting that the hoodies he sells are in stock. He attached a beautiful drawing of two lions going head-to-head, which he also made his header photo on Twitter.

“Two lions at war can reach an understanding. I have my lions den, you have yours,” he wrote.

Eventually, the tweet got around to Jonas Jödicke, who appears to be the original artist and sells prints of the artwork in his Etsy shop.

Jödicke tried to explain to Carter that he needed permission to use his art in such a way.

“You are using my artwork to promote your merchandise,” Jödicke wrote. “I have not given you permission to do so. My art is being commercially exploited by people on a daily basis. We artists have rights, too!”

Hey @aaroncarter .. You are using my artwork to promote your merchandise. I have not given you permission to do so. My art is being commercially exploited by people on a daily basis. We artists have rights, too!

Iˋd really appreciate if you could retweet this so he‘ll see it. https://t.co/ktusJEo3dz

While a rational person might apologize or offer to credit Jödicke, if not remove the tweet entirely, Carter hasn’t exactly been known for his rational behavior over the last few years.

When he’s not in the tattoo parlor getting Rihanna plastered across his face, he’s having restraining orders slapped on him by family members.

And the “That’s How I Beat Shaq” singer decided this was another moment for a completely inappropriate and over-the-top reaction. He attacked Jödicke for daring to claim any type of ownership over his art.

“You should’ve taken it as a compliment dick a fan of MINE sent this to me,” Carter tweeted. He then appeared to insist he could use the image because it was available to the public and mentioned something nonsensical about small claims court.

Carter’s tirade didn’t sit well with almost anyone, and people were quick to note the hypocrisy of a musical artist thinking he doesn’t need permission to use someone else’s creative work for his own gain.

“Check out my song ‘Aaron’s Party’ that I just released,” Twitter user @bear_onica sarcastically wrote, referencing Carter’s 2000 single. “A fan gave it to me. Besides, the song has been made public and I’m using it to promote donating to Bernie Sanders. Don’t worry Aaron, it’s mine now, you should be [thanking] me for the compliment.”

Yes, but then we'd have Aaron Carter's music.

Others pointed out the obvious legal issues with the whole situation.

“That’s not how any of this works,” Twitter user @10ampuddingcups wrote. “And with this tweet and evidence I’m sure you’d lose in court.”

There’s a new law too that all digital work uploaded to the internet gets a digital copyright. He would lose in a heartbeat

Since he just admitted to willful infringement, $150k per infringement is available as statutory damages. 17 USC 504 https://t.co/ZQUrB7q7hs

I fully agree. He will lose in court and he's just a greedy child star who has NO IDEA how copyright works at all.

It's called being a damn adult and not an entitled brat.

I hope this guy sues, I wonder how many $100 hoodies it will take (if anyone is dumb enough to pay that much for a hoodie) to settle up his stealing this guy's stolen artwork. This response is BEGGING him to sue, which is amusing given Aaron Carter probably can't afford a lawyer.

This illustrator asked Aaron Carter to stop using his work without permission or payment and Carter told him to get fucked. Any IP attorneys out there want to spank this twerp? Contact the artist below. https://t.co/llSbYhASyE

And, strangely enough, it appears this isn’t the first time Carter has allegedly stolen lion artwork.

you remember aaron carter? what do you think he’s up to now?

stealing art of lions and going batshit when he gets called out on it wasn’t my first guess either pic.twitter.com/WZOxH2NUJy

Jödicke has continued to push back against the use of his work, even saying that a similar situation happened previously with Madonna taking his work.

“I am so fed up with people taking my hard work for their own purposes without even asking,” he tweeted. “If [celebs like Aaron Carter aren’t] held responsible, people won’t stop treating artists like crap.”

Celebs like @aaroncarter should set an example, especially since he’s also from a creative background and knows copyright laws. If they can take art and do whatever with it, anyone can and will do it. If they’re not held responsible, people won’t stop treating artists like crap.

And to make this clear: I would have been happy to handle this issue differently, had he reached out privately after my tweet. But the way he responded is making a mockery of the artist community and I can’t sit with that. I‘ve had enough of people treating artists that way.

Again, thank you all so much. I‘m literally shaking because of how crazy this situation is. Still a bit confused as to the next steps, but I‘ve had tons of professionals and media people reach out.

Even the face tattoo might have been a better idea than this.