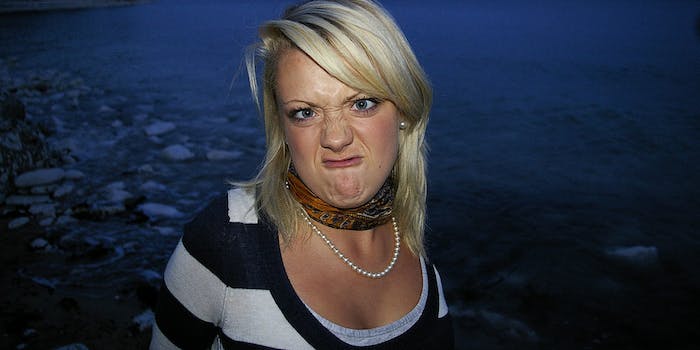 A friend has a bad case of the ugly selfies. How do I save her from herself?

My friend, who’s not Kate Upton but is also not hideous, insists on making “ugly” faces in all her Instagram selfies. Which is basically all that’s on her Instagram, for what it’s worth. It seems like a defense mechanism. How do I gently tell her that she’s not helping her cause? (And, yes: she’s single.)

Hmm…what’s her “cause” here exactly? Finding a mate on Instagram? Do people really do that? Well, okay, I know that people do that; people find love on every part of the Internet including 4chan and Puzzle Pirates. But do you have reason to believe that’s her actual goal here? And if not, does it matter that your single friend is not presenting her face in its best possible light?

Well, yes, it matters a little, in that it’s irritating to see someone pulling revolting faces all over your Instagram feed. But that’s not because she’s hurting her cause; it’s because she’s hurting your cause of not wanting to see her constantly making smooshface or whatever. That’s fine! You can be annoyed by a friend’s weird habit. Just don’t tell yourself you’re only feeling negative about it because of your concern for her dating life.

So, the real question is not, “How do I keep my friend from uglifying herself so that she can get a date on Instagram?” (come on) but, “How do I keep my friend from taking boring pictures that are no fun to look at?” And the answer is, you probably can’t, because people are grownups and can do what they want—but it might help a little to think about why she may be doing it. A few options:

In none of these cases is there a magic word to make her stop. Basically all you can do is model good Instagram behavior, and hope that she’ll start taking more interesting photos once she sees the possibilities of the medium. (And unfollow her if it irks you too much when she doesn’t.) But you seem to instinctively feel as though you have to save this woman from dumb self-expression in order to keep her marriageable, and that’s not the foundation for a good friendship. Giving serious consideration to all the reasons she might be presenting her face in a non-you-approved manner might help you relax about the fact that her Instagram would make a bad dating profile.