Their accusers say they use bots, not bullets, but one way or another, Megan Lee Heart and Brian Martin are causing a ruckus in YouTube's Wild West.

YouTubers fight dirty. They post trash talk. They organize in gangs to flag videos as spam. They file false copyright reports to get clips yanked.

These two have long riled up other YouTubers with their hijinks. But the Daily Dot has gotten what appears to be proof of their use of a sneaky new tactic: allegedly hiring bots to inflate views of critical videos in order to get their makers kicked off YouTube.

Heart and Martin did not respond to a request for comment on the allegations being raised against them. (While Heart replied to an email inquiry, she did not answer specific questions.) But multiple sources have come forward to offer apparent evidence of bot warfare being waged against their enemies.

After an outcry by users and months of inquiries by the Daily Dot, YouTube, the Google-owned video site, acknowledged its botting problem in January and took steps to crack down on the use of bots to inflate the number of views and subscribers on YouTube videos and channels.

That crackdown, however, has itself become a new weapon. Devilish YouTubers have figured out a way to use it to lash out at critics. Since botting can get you kicked off of YouTube, and Google is now paying more attention to bot usage, the tactic is simple: Hire a company to bot your enemy’s videos, then watch Google’s enforcers do your dirty work and ban them from the site for botting.

Some prominent YouTubers involved in the recent controversy over reply girls—young women who spam YouTube with nonsensical jiggle videos that highlight their breasts—say that they’ve been the target of botting frame-ups.

Accusations have swirled around Heart, also known as MeganSpeaks, one of the most notorious reply girls. She’s also gone by “Chrissie” in some online forums. Her accomplice, Brian Martin, is also known as LifeInATent—LIAT for short—and Martek, among a host of other names. (The Daily Dot has not been able to determine their real names, but we’ll refer to them as Heart and Martin.)

Since YouTubers get a cut of ad revenue from views of their videos, and some make their living off the site, this new botting tactic is serious business.

Botting typically works by paying an outside company to generate views of videos. Motives vary, but historically, botting has been used either to boost a video’s apparent popularity for marketing purposes or to get more money from Google, which pays some YouTube video creators a cut of ad revenues.

Botting has been a problem on YouTube since at least 2009. YouTubers hate it: It goes against the notion that the site is a rough meritocracy where the best videos get the most views. (As much as YouTubers loathe reply girls and their bland videos, at least they’re generating views the old-fashioned way.)

Since its advertisers’ money is at stake, YouTube as a company views botting as a serious offense, and has banned users caught buying views.

Heart and Martin have a long history of tangling with the YouTube authorities. What appears to be one of Heart’s former accounts, BlondieVlogs, was “suspended due to multiple or severe violations of YouTube’s policy against spam, scams and commercially deceptive content,” according to a message on the site that appears when you try to access it. A similar message appears for the LifeInATent account and for an account, SkitsNvlogs, where both Heart and Martin appeared in videos.

That’s yet another YouTube policy Heart and Martin appear to be violating. Martin now appears to be vlogging as KMartinTV, while Heart operates MeganLeeHeart and other channels, including MeganSpeaks—the account which figured so prominently in the reply-girl scandal.

An anonymous informant has shown the Daily Dot evidence of a far more serious infraction than reopened accounts.

A copy of a receipt shows someone named Brian Martin, using the email address [email protected], purchasing bot views. While we haven’t been able to verify its authenticity, it details a purchase of 540,000 views for $920 on February 25. 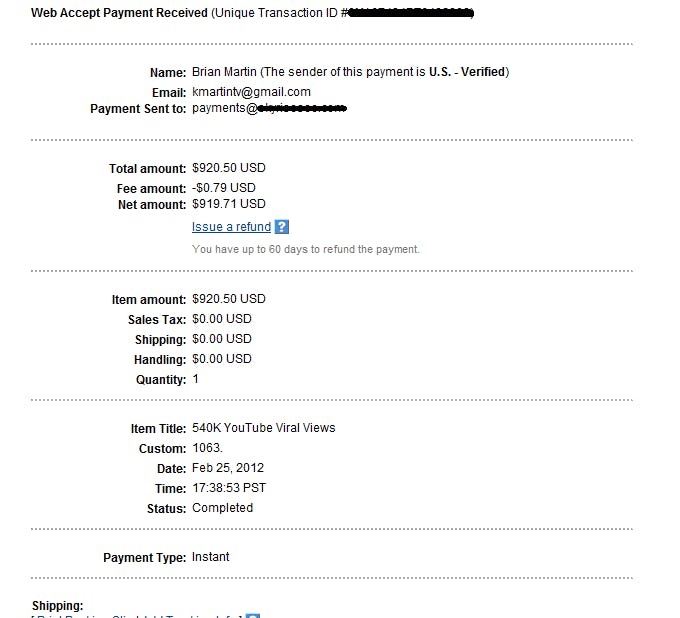 DireBoris was one of the first people to speak out against the reply girls last month. In a matter of days after Martin’s alleged purchase of view bots, three of DireBoris’s videos on the subject hit YouTube’s front page with suspiciously high view numbers, leading him to ask a YouTube manager, Bing Chen, for help on Twitter.

The chat logs also show Martin plotting to frame Yogscast, a comedic duo who produce a video-gaming podcast. Yogscast’s members believe that their YouTube videos have been targeted with bots, they told the Daily Dot.

Another reply-girl critic, HappyCabbie, claimed that his latest video had been botted, and asked YouTube to “demote” his video from the front page because, he said, it’s “not fair to those who [are] being bumped off because someone is botting me.”

“YouTube is always looking into botting issues,” a YouTube representative told the Daily Dot. “Botting isn’t welcome here, so we’re working to get this resolved quickly.”

YouTube takes accused botters like Heart and Martin so seriously, in fact, that the representative we spoke to asked that we not use his name, as he didn’t “want the botters to come after me.”

Was he kidding? We couldn’t tell. But you know you’re dealing with a real Bonnie and Clyde when the lawmen hide in saloons.

Update: Heart replied to an email from the Daily Dot, but did not address the specific allegations raised by her critics. We’ve updated the language in this story to make this clear. We’ve also invited Heart’s manager to send us a statement.

Update 2:52pm PT, May 8, 2015: An individual claiming to be Brian Martin contacted the Daily Dot, disputing the allegation that he and Megan Hart employed third parties to bot specific YouTubers. He also refuted any connection to LifeInATent and Martek.