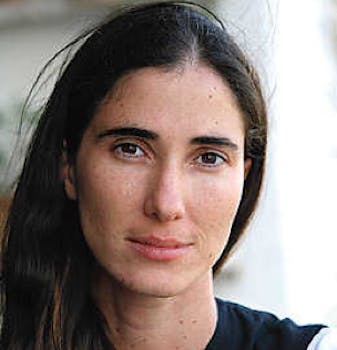 Godmother of Cuban blogging finally gets her passport

Yoani Sánchez, a prominent Cuban dissident and one of the earliest and most important bloggers in the Communist nation, has finally been granted a passport.

Yoani Sánchez, a prominent Cuban dissident and one of the earliest and most important bloggers in the Communist nation, has finally been granted a passport.

“Incredible!,” she tweeted. “They called me at home to tell me they’ve already issued my passport! They’re about to deliver it!”

“Here it is, all that’s left is to board the plane.”

With the transition from Fidel Castro to his brother Raúl, indications were given that the Cuban government intended to soften its stance toward personal freedoms. One of those was the freedom to travel. In January, it eliminated the need for the dreaded “exit permits” and immigration offices across the country were flooded with passport applicants.

The 37-year-old Sánchez, a Havana resident, was one of a group who found it much more difficult to get approval for travel, however. A constant thorn in the side of the government, Sánchez used her blog, Generación Y, to challenge the government over issues relating to speech and privacy.

She and her husband also created a platform for other Cubans to blog, Desde Cuba (“From Cuba”), and a critical magazine, Contodos, among other publishing and writing projects.

Cuba, despite the recent connection of an undersea cable from Venezuela, remains one of the least connected countries in the world. Bloggers in Cuba have to spend hard currency and sneak into a tourist hotel to send their blog posts to friends and confederates outside the country, who post them. Sánchez’s blog has been blocked in Cuba for years, so she has to rely on screenshots sent via email to see what Generación Y looks like after an update.

Sánchez left Cuba for several years in 2002, but returned, despite being officially disallowed a permanent return. She secured residency by tearing up her Swiss passport. In the intervening years, she has been arrested and harassed by security agents and denied permission to travel well over a dozen times, including to awards ceremonies at which she was the recipient.

“I am happy and sad,” Sánchez later posted, “on one hand, I have the documents I need to travel, but various friends, like @JAngelMoya aren’t being allowed.”

Angel Juan Moya is one of the 75 dissidents arrested in the Black Spring crackdown a decade ago. All have been released from prison and most chose to live in exile in Spain, but Moya is one of 12 who elected to stay in Cuba and continue their work. He remains on parole for the remainder of his original, 20-year sentence.

“A Castroist functionary told me that I have been regulated in the public interest and they could not issue me a passport,” Moya tweeted.

The Cuban government has announced that certain professions will be forbidden from travel, as well as anyone else whose travel would be contrary to “national security” or the “national interest.”

Sánchez indicated when she first applied for her passport she would travel as soon as possible were it issued. She indicated by Twitter that she intended to visit her sister, who moved with her family to the United States.

“Havana of the lights and shadows,” she tweeted, “of the twilight that smells of sweat and burnt oil, I miss it and haven’t even left yet.”