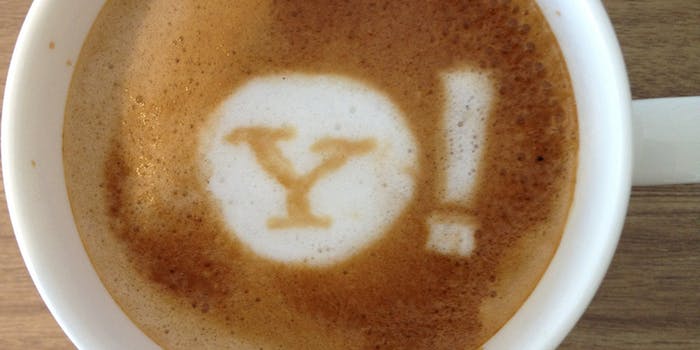 Marissa Mayer's company may last forever—whether we like it or not.

Someday when historians remember the first few decades of the Internet, one of the strangest anecdotes will be the surprising endurance of Yahoo.

The once powerful search engine was dealt yet another blow in its efforts to rebrand itself this past week, when its latest earnings report revealed that the company is now essentially worth “less than nothing.” How could this happen? According to CFO Ken Goldman, most of it has to do with the company’s efforts to enter the streaming market with Yahoo Screen. Yahoo lost $42 million on its reboot of Community and the platform’s other two original shows—and have subsequently canceled another upcoming sitcom. Following its dismal earnings announcement, CEO Marissa Mayer declared, “As we move into 2016, we will work to narrow our strategy, focusing on fewer products with higher quality to achieve improved growth and profitability.”

Whether the new strategy Mayer describes will actually lead to “improved growth and profitability” is unclear, but don’t start planning Yahoo’s funeral just yet. If its continued existence points to anything, it’s that Yahoo may never die.

This isn’t the first time that Yahoo has been called worthless, but its bigger issues—even beyond actual revenue—are leadership and direction. Several high–ranking execs have left the company for other jobs, including Chief Marketing Officer Kathy Savitt, who spearheaded the company’s foray into original programming. Although Yahoo had previously hinted at doing another season of Community (a show that once promised exciting possibilities for them and the Internet at large) or helping produce a long-discussed feature film, this now seems unlikely. Right now, the company’s last best hope to save its streaming empire is an electronic music show set to be produced by Simon Cowell.

Yahoo lost $42 million on its reboot of Community and the platform’s other two original shows—and have subsequently canceled another upcoming sitcom.

But Yahoo’s attempt to enter the streaming landscape was indicative of the company’s larger existential crisis, no matter how well Community did or didn’t do. Mayer’s decision to keep it simple is significant—because for a long time now, Yahoo hasn’t known what it wants to be. Yahoo Screen may have made sense on paper, taking into account the success of streaming services like Netflix, Hulu, and Amazon Prime, but unlike those companies, Yahoo didn’t have a clear agenda prior to investing in original content. Netflix and Hulu built their brands on streaming, while Amazon would still have its titanic business of selling and shipping products if its gamble didn’t pay off. But in 2015, what does Yahoo even do?

It’s starting to look as if Yahoo’s future lies less in content creation and more in distribution. The most prominent example of this is the company’s livestreaming deal with the NFL. Last Sunday, Yahoo pulled off a historic coup when its first livestreamed game—between the Buffalo Bills and the Jacksonville Jaguars—pulled in 2.36 million viewers.

The occasion marked the first time that one company distributed an entire NFL game through the Web. While streaming quality was reportedly varied (and some analysts were unsurprisingly skeptical of the numbers), the NFL said they were “thrilled with the results.” Most of the audience tuned in from the United States, but 33 percent were watching from other countries, indicating that this could attract a huge international audience both for Yahoo and the NFL alike. Since livestreaming continues to be a major blindspot for broadcast networks, it would make sense for Yahoo to penetrate this undersaturated market.

The company was also savvy enough to recently partner with Google to allow users to view Google search results on Yahoo’s site, as well as results from Bing (so as not to disrupt its deal with Microsoft). It might sound surprising that Yahoo, who are still widely known as a search engine platform first, would succumb to its biggest rival—but in the long run, it’s also a smart move. The war for the best search engine is over: Google won, but Yahoo needs to prove they aren’t dead yet.

Mayer’s decision to keep it simple is significant—because for a long time now, Yahoo hasn’t known what it wants to be.

And according to the numbers, Yahoo is doing just fine. They’re ranked fourth for total ad revenue across the entire digital landscape and eighth in email market share. In addition, Alexa ranks Yahoo’s website in the top five when it comes to overall traffic, while Comscore found in 2014 that Yahoo was actually the most popular website in the U.S.

While it’s an accepted fact that Google dominates the Web, it’s seeming monopoly still leaves room for other services to carve out their own niche. Research from Eli Schwartz, the Online Marketing Manager for SurveyMonkey, found that Yahoo’s brand recognition remains high—with 80 percent of respondents reporting that they’d used the service, while 8 percent still rely on it as their search engine of choice. Findings show that Yahoo and Bing users tend to be a little older and a little wealthier, generally spending more money online. (This makes sense, taking into account the select services provided by the Yahoo Finance section.)

But unlike AOL, the company’s business doesn’t rely solely on older Internet users. Yahoo Mail remains particularly popular with women, and by acquiring Tumblr, the company has managed to attract a younger audience. Ultimately, Yahoo has managed to stay in business by keeping its fingers in many different pies. This is the antithesis of Marissa Mayer’s new direction for the company, but being a jack of many trades and a master of none has nonetheless helped Yahoo remain one of tech’s most bewildering oddities: a dying company that may outlive all of us.

This isn’t the success story the company’s 90s heyday promised, but for Mayer and her company, the consolations of persistence itself may be enough.