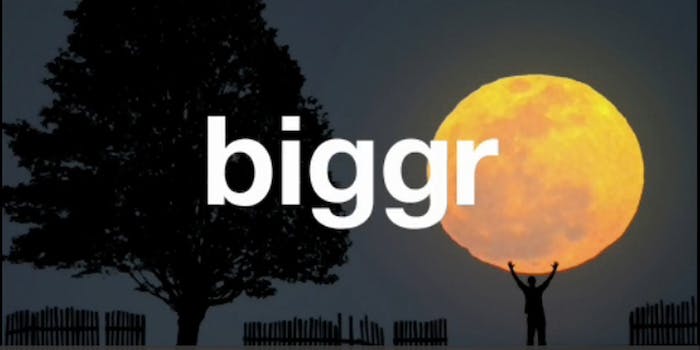 At Yahoo's triumphant press conference yesterday in New York, it tried admirably to take the spotlight off its latest acquisition, Tumblr, and shine it on Flickr.

At Yahoo’s triumphant press conference yesterday in New York, it tried admirably to take the spotlight off its latest acquisition, Tumblr, and shine it on photo-based social network Flickr. In addition to unveiling a brand-new redesign that prioritizes big, bold images above nearly all other forms of content, Yahoo announced Flickr users now had a terabyte of personal storage space, pursuant to their goal of being “Biggr. Spectaculr. Wherevr.”

But even as questions flew about the Yahoo Tumblr merger (Mergr?), and while Tumblr continued to rage quit over the news, Flickr users went into defensive mode. Angry and upset that Yahoo had deployed the dramatic changes without any advance warning or user guides, they flooded the site’s announcement notice. In just under 18 hours the page has garnered over 100 pages of comments from frustrated users upset with the changes in functionality, navigation, and layout.

A widely seconded comment by Flickr user Carter Baldwin summed up the feelings of nearly everyone on the thread: “this. is. FUCKING. HIDEOUS.”

On May 19, the basic Flickr layout was a horizontal navigation paired with a narrow photo-gallery grid with evenly sized thumbnails, lots of text, and a white background. On May 20, the layout essentially reversed itself: White became black; thumbnails in a narrow space became variously sized photos crammed together on a large page; lots of text became almost no text. It was a dramatic, take-it-or-leave-it change. So far, for most Flickr users, the response seems to be a flat-out rejection. “500px is better,” declared noirdelux. “Even deviantArt is better. If it doesn’t change back, I’ll be gone soon.” 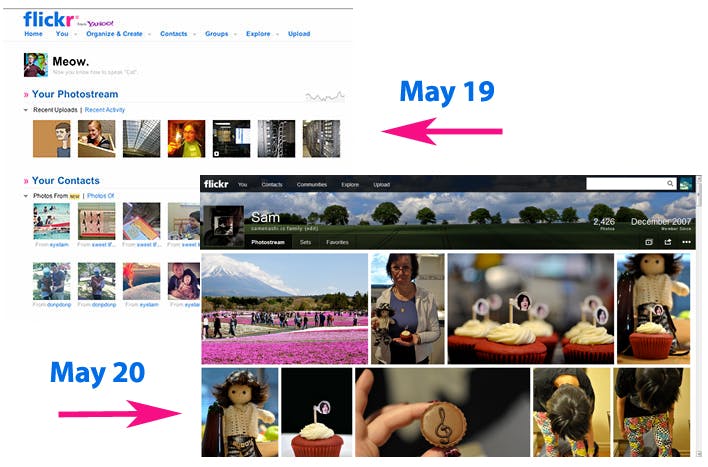 Yahoo took a huge gamble with the Flickr redesign, especially coming at a moment when everyone is looking at Yahoo’s relationship with Flickr users as a study of its potential relationship with Tumblr users. At yesterday’s press conference, Yahoo CEO Marissa Mayer assured attendees that Yahoo’s new executive team had learned from past mistakes, which include a notoriously long line of failed acquisitions.

But judging solely by the response to the Flickr redesign coming from its core userbase, it seems Yahoo is repeating past mistakes: making major decisions and changes without consulting its core communities of users, and attempting to fix what isn’t broken.

My 9 years of loyalty to Flickr has been punished.

STOP PISSING ON MY LEG AND TELLING ME IT’S RAINING!

I am so angry at the Flickr staff that I could cry.

One of the core points of contention is that the site’s navigation. Functionality also seems to be slow; many users cited trouble loading pictures in Flickr’s new “endless scroll” feature. Another is that while Yahoo emphasized how much better photos would look on the new layout, some users feel it actually undermines the community’s basic appeal to photographers.

“The way [the photos] are all crammed together in one space is against the general practice of how photographers display their photos—alone and surrounded by either white or black,” one longtime Flickr user anonymously told the Daily Dot. “Plus the old way, you could see stuff like the date / location / copyright status right below each photo, which, as a photoresearcher, made everything a little easier.”

Upset users may not be the only trouble Flickr has with the new redesign. Yesterday, within hours after Yahoo announced the terabyte of free storage space, a Github thread was telling users how to access the storage site for non-photo-related file sharing.

A terabyte can hold a lot of goodies from the Pirate Bay. Just saying.

Still, optimism was the byword at Yahoo this week, with Mayer professing confidence in the Tumblr merger, which she said grew out of a look at potential partnerships with Tumblr. With a press release that took the unconventional approach of declaring “We promise not to screw it up,” Yahoo certainly seems to be looking to forge a bond with Tumblr’s millions of teen and tween users.