One woman's Tumblr is gaining some attention for its skewering of so-called plus-size fashion, but is the media attention causing more harm than good?

Bad fashion style blogs can be a hilarious way to skewer the fashion industry and critique the ridiculous beauty standards that the industry typically upholds. But when the fashion being mocked is plus-sized, it’s easy to completely miss the point of the joke.

Last week, plenty of people were laughing over plus-sized fashion sendup wtfplus; but Roxy, the woman behind the Tumblr, wasn’t one of them.

Roxy is part of the “fatshion” community, an evolving trend of fat activism that pairs positive self-image with fashion tips, social commentary, and positive representations of fat people, most often women. One of the earliest fatshion blogs, LiveJournal’s fatshionista, was a niche community when it was founded in 2004, but today fatshion blogs abound, especially on Tumblr.

But not everything in the fatshion community is positive, as any woman who’s ever tried to find non-stretch jeans above a size 18 knows all too well. And when women are faced with the dismal prospects of trying to find attractive outfits that fit them, it helps to have a strong sense of humor—or at least to follow a funny Tumblr that mocks the sorry state of plus-sized fashion along with you.

When Jezebel linked to wtfplus last week, they intended to praise the humorous style blog for its witty takedown of the notoriously garish fashions that the plus-sized women’s clothing industry constantly puts on the market.

But instead they—and other media outlets who tried to follow suit—got an earful from the owner, Roxy, who felt the media was being hypocritical by praising her blog while doing nothing to further the acceptance of fat women in society or in the fashion industry.

Explaining why she declined an interview with NBC’s Today website, Roxy wrote: “you think it’s really important to ‘change the conversation’ but you want to do so by embarrassing a fat woman who is already having this conversation?” She went on to point out that many of the sites covering her blog, like Jezebel and Today, were also complicit in the erasure and even ridicule of fat women.

“I think the dominant conversation in media about fat women and fat bodies in general needs to become less toxic,” Roxy said in an email Friday, “and I think that would do more to improve the way fat people experience life and the way everyone reacts to and regards fat people than a silly one-off article about my blog.”

Initially, Roxy refused an interview with the Daily Dot as well. But then I wrote her and told her how much I appreciated her blog, as someone who’d had trouble trying to find clothes to wear after all the Lane Bryants within a 50-mile radius of my hometown closed. I told her that I’d started occasionally shopping in the men’s section just so I could find clothes that fit without having to wear outrageous patterns, polyester everything, and only stretch fabrics. And don’t even get me started on bra shopping.

We spoke via email about some of the larger social problems behind the fashion industry’s constant choice to dress fat women in things like hideous animal prints: 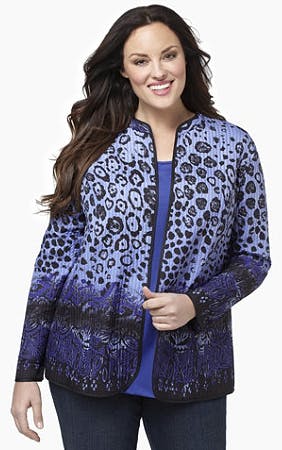 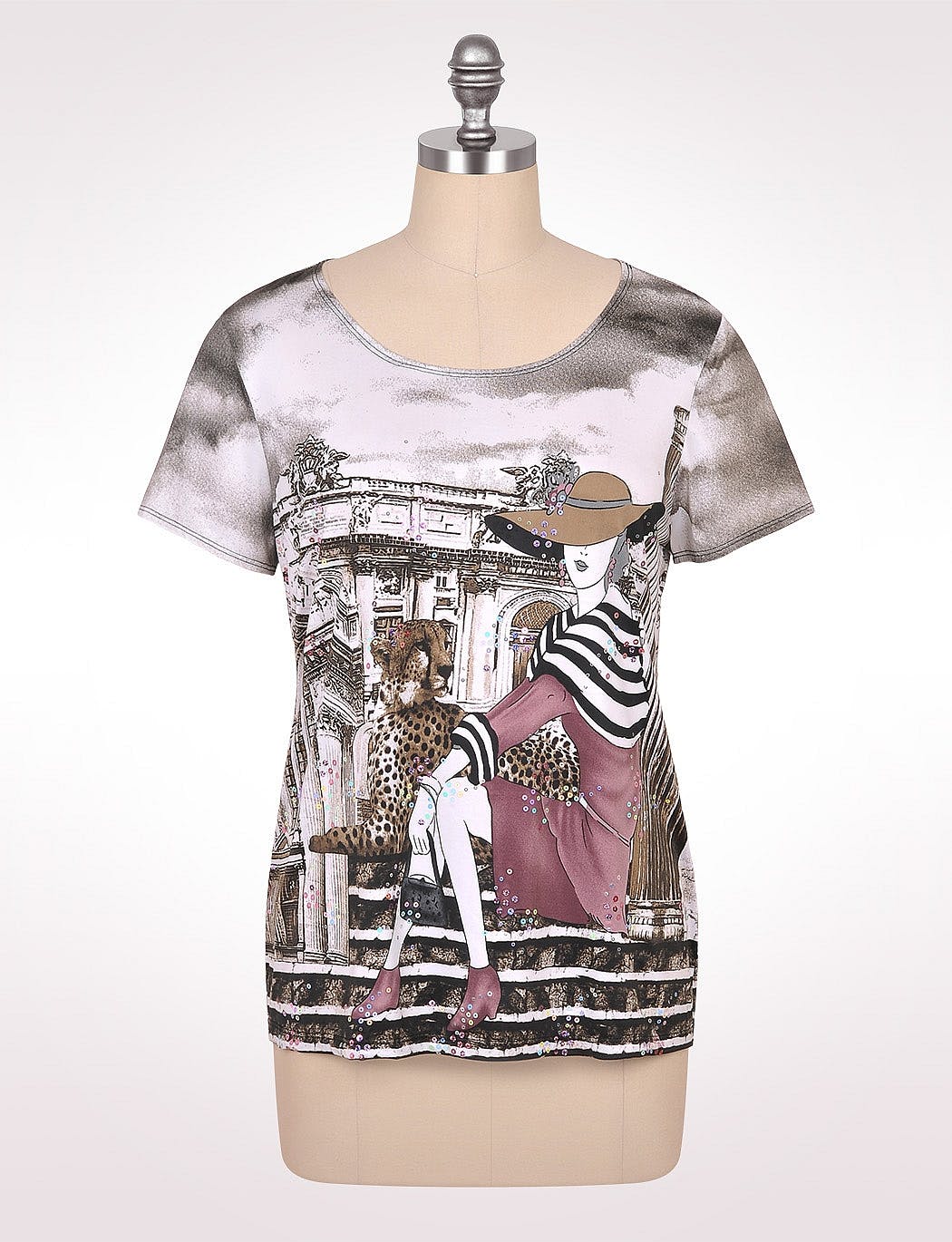 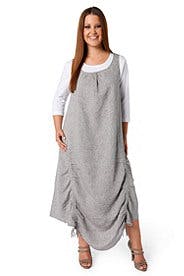 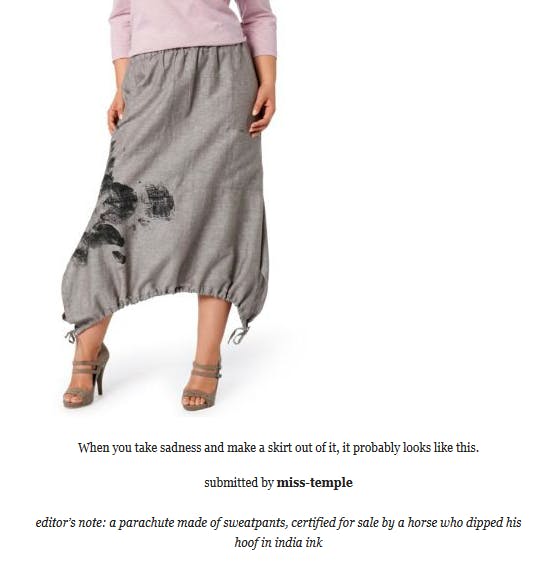 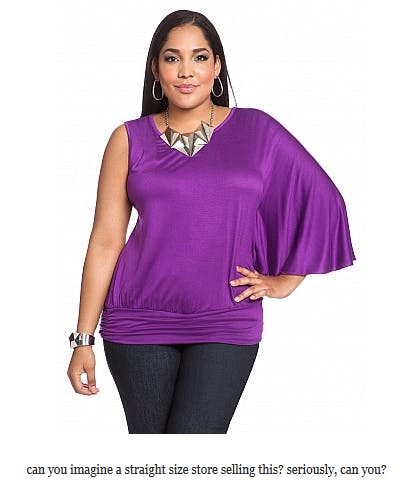 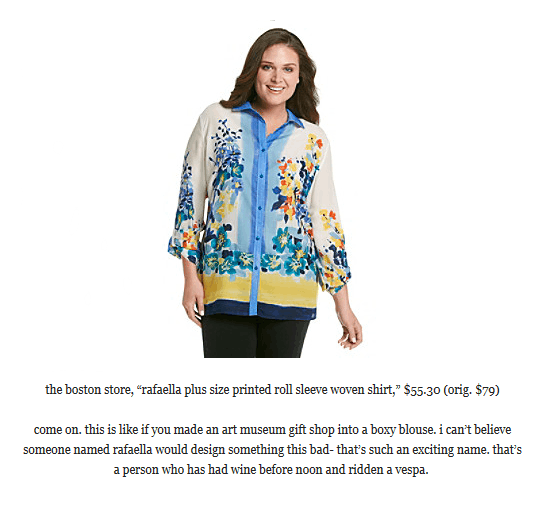 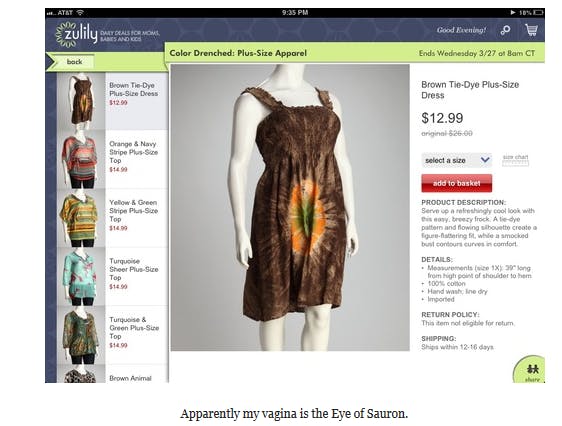 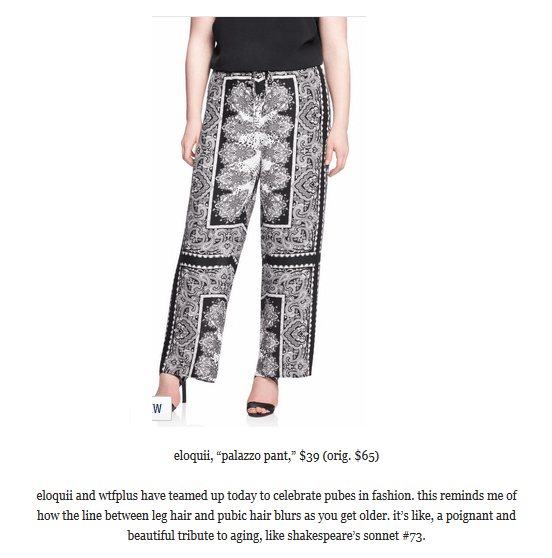 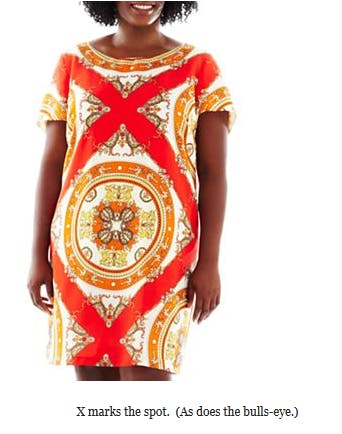 … And did we mention hideous prints? 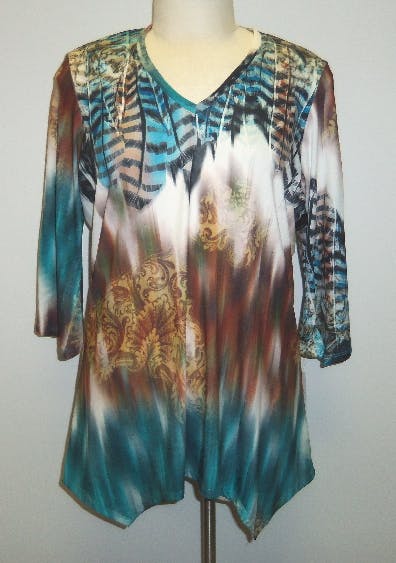 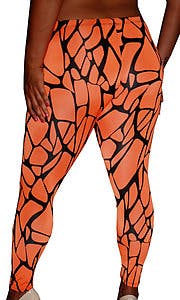 But as fun as it may be to poke fun at bad clothes, wtfplus is serving up more than laughs. It also provides commentary on the inexplicable price jumps between plus-sized clothing and their smaller-sized counterparts. It warns readers away from retailers whose clothes look good online but fall apart easily or turn out to be deceptively ill-cut or poorly made. And it serves as a much-needed resource for fat women on Tumblr to discuss clothing options, find reliable retailers, and advocate for more clothing options for larger bodies.

Roxy said that although the increased exposure has meant some nasty fatphobia, “the overall response” from her readers has been “amazing”:

Like most groups who face discrimination, fat people are often made to feel like they must be quiet and act happy and act like the discrimination they face is no big deal, or that it’s their fault, and I actually love the “I’m fat as hell and I’m not going to take it anymore” response that I’m getting.

Roxy says she had long thought about starting a Tumblr to talk about the problems with fat fashion, but that a recent trip to Torrid to revamp her wardrobe after going up a size drove home the frustration:

[T]his is kind of the story of my life with plus size shopping—buy an item for too much money, settle for something that is embellished beyond belief/is too short for your liking/has too few sleeves for the number of arms you have, spend more money to make it wearable, and then roll the dice and hope it actually fits when it arrives, since there’s so few plus size brick and mortar stores.

If the submissions that her readers send in are any indication, they’re all able to relate: 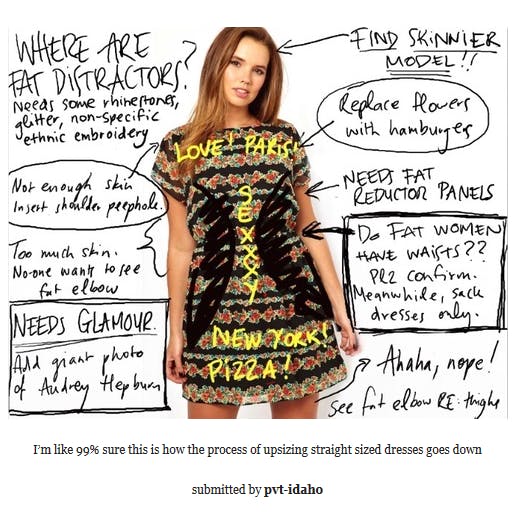 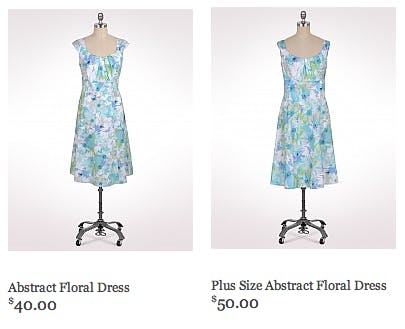 The question of why plus-sized fashion is so horrible is one that many, many fat women have asked and been unable to answer. Fashion gurus like Tim Gunn have lamented the lack of beautiful clothes for fat women; Gunn’s own Project Runway often reveals the fatphobic attitudes of its designers through its annual “Real Women” challenge. Season 3’s Jeffrey Sebelia made his “real woman” cry after belittling her size, but still went on to win the competition.

Many small plus-sized boutiques eventually go out of business due to a lack of follow-through on their promise to provide well-designed and flattering clothing for fat women. Others, like ReDress, are calling directly upon the plus-sized community for help staying afloat or getting into the business.

When I asked Roxy about the problems with plus-sized fashion, she replied that fashion designers weren’t making the effort to design affordable clothes for larger sizes “because they don’t want their brands associated with fat people,”

and they don’t realize yet that our money works exactly the same as thin people money. They don’t want to take a risk because they’ve seen similar ventures fail, but similar ventures have failed because they don’t listen to fat people or think hard enough about fat bodies—if you extend your ‘straight sized’ line to pluses, plus size people will buy it. We don’t need a special online-only ghetto of polyester nightmares.

But while some readers have praised her for being so vocal and open about the need for more options in plus sizes, Roxy thinks the media exposure her blog is getting may be sending the wrong message. And while her blog may be humorous, it’s there for a serious reason, and Roxy doesn’t feel like performing for outsiders.

[N]on-fat people want us to be good, to be self-effacing, to be sexless and friendly and invisible, to ‘make up’ for the way our bodies look. I’m not interested in being a fat clown to make thin people more comfortable. I am smart, weird, rude, loud, sexually active in ways that thin people should picture in their heads right now, and I’m very, very fat. I am a fully realized human being, and so are the rest of us. We eat food, we have sex, we have individual personalities, and we have the same thoughts and feelings as everyone else.

Roxy has stated that she’s not interested in being an activist all the time, especially when just existing often feels like activism all by itself. “Ultimately my goal is just to commiserate with other fat people about a crappy problem we have to deal with, and not be an activist who is going to turn the fashion industry on its ear,” she said. Her blog is firmly in the category of “fun project” rather than “activist community”—though it’s obvious from a glance at her Tumblr that it often functions as both for her readers.

But if media exposure can also be toxic, is there any way at all to highlight the issues that fat women face without also increasing the amount of fatphobia we have to endure?

Roxy says yes—but not by singling out funny fat women or their blogs.

I don’t even need to feel celebrated—I just need to feel represented. If I could see articles about women that don’t talk about their bodies, how they’re aging, how much they weigh or don’t weigh, what they’re wearing, etc. and also feature women of all sizes, I’d be blown away.

Until we arrive at that halcyon day, fat women can continue to use wtfplus as a place to commiserate on our hilariously dowdy/frumpy/matronly lot in fashion life. “I really, really love all of the submissions and asks I’ve gotten,” Roxy says.

It’s nice to be able to TALK about being fat. In the past few years I’ve gotten 100% comfortable with my body and have challenged everyone I know to start thinking and talking about fatness differently… but I love having the opportunity to talk to other fat people about this thing most of us have been dealing with since elementary school. The intersection of funny, frustrated, and fat is a great place right now.