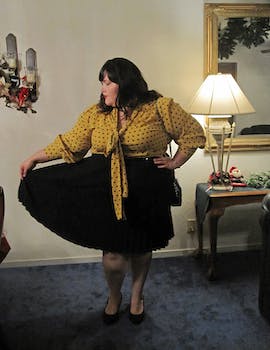 Tired of waiting for Vogue and Elle to meet the demand for plus-size fashion, many women have taken to the Internet to find their wardrobe inspiration.

You’d be hard-pressed to find a celebrity gossip magazine these days that doesn’t include at least one article about body image or an actress learning to “accept her curves.” But while there’s evidently a huge audience for these types of stories—and the weight-loss interview that inevitably appears six months later—both mainstream and high-end fashion retailers are yet to catch up.

A particularly telling statistic is the difference in monetary success between Jessica Simpson’s clothing brand and Victoria Beckham’s. Beckham’s super-skinny designs have received accolades from critics and earned her a place at New York Fashion Week, netting her company $95 million last year. Jessica Simpson’s plus-size-friendly designs, by contrast, made a cool $750 million over the same period of time.

Tired of waiting for Vogue and Elle to meet the demand for plus-size fashion, many women have taken to the Internet to find their wardrobe inspiration. Ranging from blogs purely dedicated to pictures of clothes to feminist diatribes in favour of fat-acceptance and body positivity, the plus-size fashion movement (coined “fatshion”) is a blossoming subculture in the truest sense of the word.

“Although my blog appears to focus on clothes, there’s something radical in my approach to dressing which I guess springs out of a political impulse to question the image of what it means to be fat,” offered Bethany Rutter (pictured below), creator of self-proclaimed fatshion blog Archedeyebrow. “Uncompromising self-love is a radical statement for anyone, let alone fat girls.” 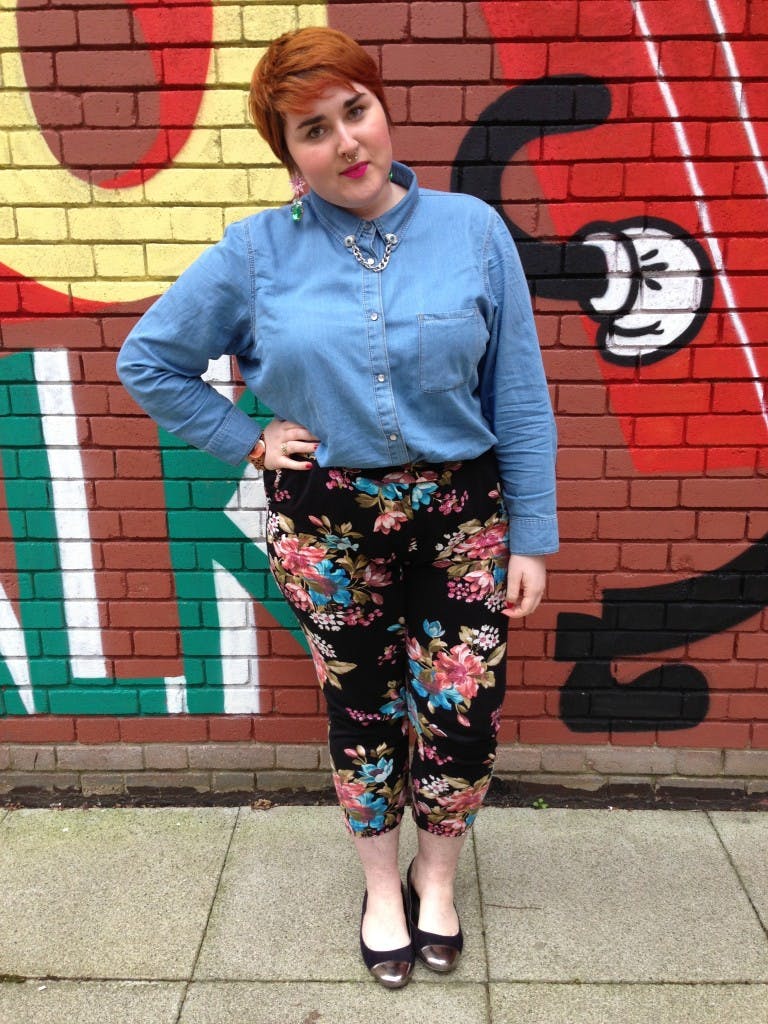 The radical undertones of Rutter’s blog ripples throughout much of plus-size fashion community. Their content is often satirical and irreverent, but presented from a strong feminist perspective. Perhaps the most well-known example would be Nancy Upton’s controversy-baiting submissions to a modeling competition run by American Apparel, which brilliantly challenged the fashion company’s target demographic with hilarious and hugely popular self-portraits. She won the competition and forced the issue on a national level.

A similar aesthetic can be found on Tumblr, where people use hashtags like #fatshion and #fatspo to mock the trend of “thinspo”, or thinspiration—the widespread practice of sharing photos and videos of ridiculously slim celebrities and other women to encourage weight loss.

Deathfatties, a popular Tumblr blog, “is dedicated to showcasing the vitality and visibility of those who self-identify as “deathfat,” a term coined by the fatshionista LiveJournal community that refers to the BMI chart’s categorization of the morbidly obese. The entries are typically user-generated, comprised of a photo and description of the subjects clothing, right down to their sizes.

It’s a matter of pride, according to Frances, a public servant in Australia who runs the fat-acceptance blog Corpulent.

“I was sick of never seeing bodies like mine celebrated or even presented as normal in the mainstream media, so I set up my Tumblr to fill the gap,” she said.

“In sourcing photos, videos, and quotes of and about fat women, I found fat acceptance and blogs. Reading them and the blogs they linked to made me realise that there was a social and cultural framework for how I related to my own body and how society relates to bodies like mine. I finally saw it was political.”

Girl With Curves, by contrast, seems to be aiming directly at the glass ceiling between plus-size and mainstream fashion. The site was originally dedicated to photos of creator Tanesha Awasthi modeling her own outfits, but it’s evolved into something resembling a glossy magazine in its own right, with style tips and a lifestyle section along with the regular photo shoots. Girl With Curves boasts 2200,000 Tumblr followers and has been featured in Grazia, Glamour, and the New York Times. And rightfully so. The site understands the market, mindset, and needs of the community, offering inspiration, how-to tutorials, and easy social sharing on Pinterest and Instagram. 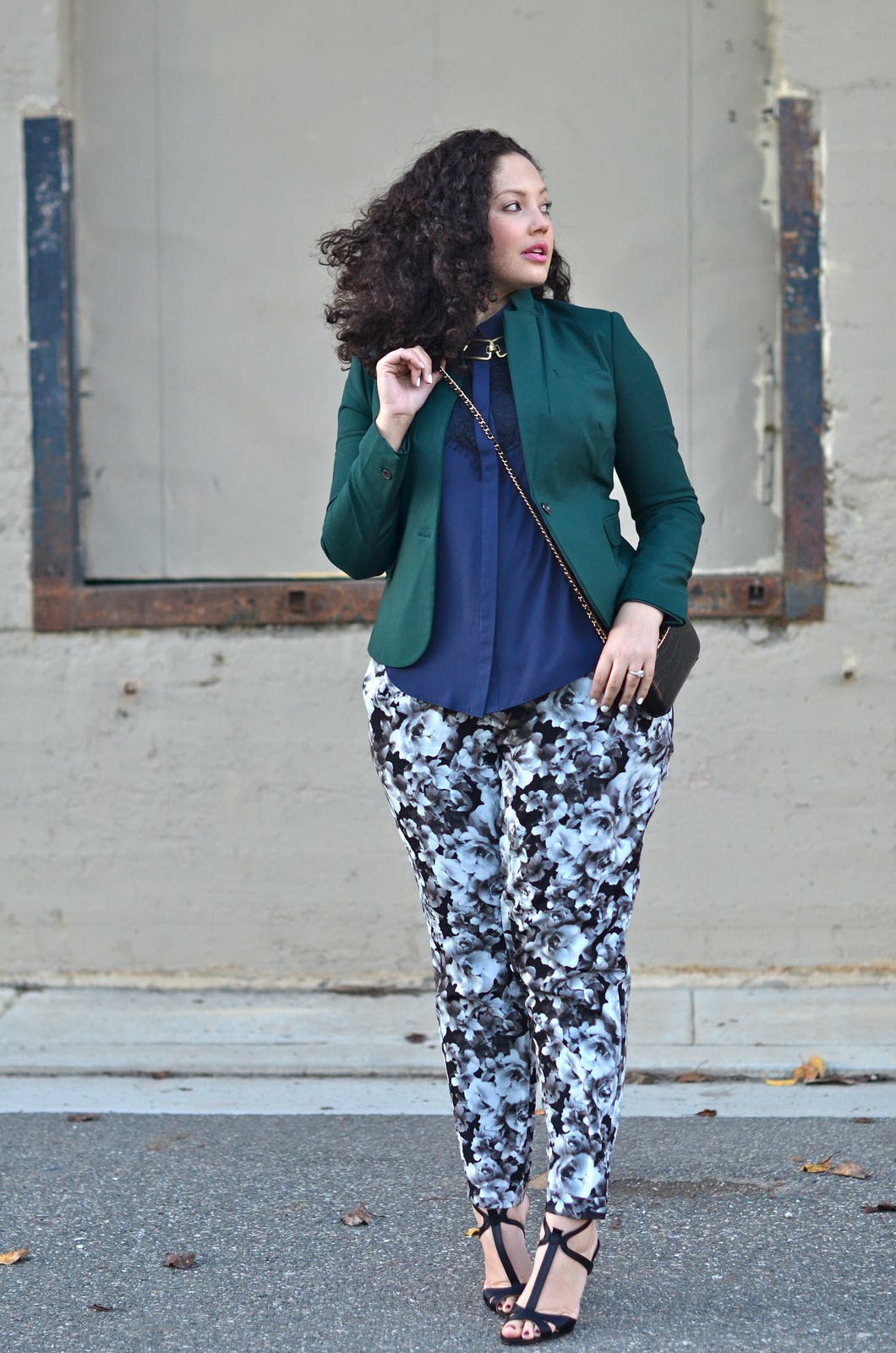 Photo via Girl With Curves/Tumblr

“If you look back at some of my earlier posts and videos, you’ll find they’re laced with self-hate and pressure to lose weight,” recalled Amanda Valdez of personal style blog Fashion, Love and Martinis. “The more I blogged, formed friendships with fellow bloggers, and saw other girls in posts who looked just like me, I began to love and accept myself. My posts and videos grew from self-hate to more about my personal style and life experiences. It’s funny how the world works because now my posts are having the same affect on others struggling with self acceptance.”

There’s still a long way to go, but Frances stressed the importance of social networking on the road toward acceptance.

“Fat is still seen as unhealthy, fat discrimination still exists, and plus size fashion is generally still frumpy, of poorer quality, and more expensive,” she said. “However, we are getting there. … With the Internet, fat acceptance activists have a community that we can draw on for support, for numbers, and for friendship.”

That’s an encouraging sign and a lasting reminder that fashion and beauty comes in all shapes and sizes.

Photo of Amanda Valdez via Fashion, Love and Martinis